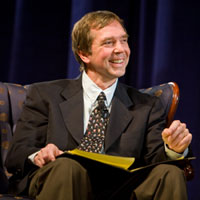 There are few people I like better in the world than my friend Dean Nelson. Some of my most spiritually significant experiences and most hilarious conversations have occurred in his vicinity, and I suspect that’s no coincidence. Dean’s the kind of guy who’ll be telling you a story that has you shaking with laughter until he gets to the punchline and (boom) suddenly you’re wiping tears from your eyes, but they’re not the laughing-too-hard kind of tears.

So I am an unapologetic Dean Nelson fanboy. Dean is a journalist whose work has appeared in everything from the New York Times and the Boston Globe to Christianity Today. He’s the founder and director of the journalism program at Point Loma University in San Diego, and the host of the legendary Writer’s Symposium by the Sea, held annually on campus. Also, he has a Ph.D. in journalism. Seriously, how many people do you know with a Ph.D. in journalism? (I know one.)

Dean is the author of several books, including God Hides in Plain Sight, his latest. His thinking in that book — about discovering God via the traditional Christian sacraments as they occur in your day-to-day life — directly impacted a chapter or two of O Me of Little Faith. In summary, I want to be Dean when I grow up, and I’m so grateful he was willing to contribute to the Voices of Doubt series:

It doesn’t happen very often that an elderly woman walks up to me with tears in her eyes and can barely get the words out. I had just finished speaking at a retirement community for their spiritual renewal week, and several of the residents came up to talk with me afterward. The community was largely made up of retired ministers, missionaries and educators, and they seemed to deeply engage with the themes of my seven talks — all based on seeing the sacraments in everyday life.

This woman, though, didn’t want to talk about vocation, confession, baptism, marriage, communion, confirmation or extreme unction. She was focused on one little digression I had made in that evening’s talk. My overall theme that night was on becoming a more spiritually deep person (a type of confirmation). During an election season in particular, the voices that seemed the most dominant were the ones full of fear and anger, I said. But fear and anger have never been our best teachers. In fact, I continued, the Bible repeatedly has messengers from God saying Fear Not. And usually that statement is followed by the word Behold. In other words, don’t let fear be your guide — instead, see me all around you. God calls us to be deeper than just being full of fear and anger.

Then I just tossed in this seemingly throwaway paragraph — “We think we’re in spiritual trouble when we doubt — whether we’re doubting God, the existence of God, our own relationship with God, ourselves, whatever. But the Bible doesn’t say Doubt Not. It says Fear Not. There’s a big difference. When we doubt we join a pretty good cloud of witnesses, including Mother Teresa and Jesus himself. Paul Tillich says that doubt isn’t the opposite of faith — it’s actually an ELEMENT of faith. So when you doubt, you’re in good company. Doubt just means you’re on the journey.”

THAT’s the part that reached this 80-year old. With tears now spilling out of her eyes she said, “I’ve been doubting quite a lot, lately, and feeling guilty about it. I was a missionary my entire adult life. I thought I shouldn’t have any more doubts. But I’ve been starting to have some health problems, and I’ve begun to wonder if it’s all true. And you showed me that it doesn’t mean I don’t believe in God any more. I just wonder sometimes.”

At the Christian universities where I speak, that same paragraph always grabs someone. And it’s always someone who thought he or she was a freak for having doubts. I tell them, “Welcome to the club. Certainty is overrated. Only when we doubt can we enter into the Mystery that is God. Not knowing is where the real action is. That’s what leaves room for wonder.”

For the last two years I’ve been working on a book about the faith and science debate, focusing on the British physicist/priest John Polkinghorne. As a physicist at Cambridge University he helped explain the existence of the quark, the smallest known particle. Then he left physics and became an Anglican priest. Imagine bowing at an altar in an Anglican church in Cambridge, as I did last year, and having one of the most famous physicists in the world hold out bread and a cup to me and say “This is the Body of Christ, broken for you.” I took the elements, but didn’t swallow my doubt. Really? A priest who is a physicist telling me that these elements are more than what they appear to be?

But of course the whole world is more than it appears to be. In my work on this book I was struck by a quote I came upon by the atheist physicist Steven Weinberg, who won the Nobel Prize and teaches at the University of Texas. He said, “We don’t believe in quarks because anyone has seen one. We believe in quarks because the experiments that include them seem to work.” He doesn’t know that there is such a thing as a quark, because he hasn’t actually seen one, but he is motivated to believe in quarks because of other evidence. No one is certain, though. It’s an unseen reality. There’s an unspoken element of doubt in there, don’t you think? The driving force behind both science and faith, according to Polkinghorne, is this question: “What makes you think this is the case?” It’s what causes us to press on and find out, allowing plenty of room for doubt.

For years scientists knew that light was a wave. But they couldn’t explain why it sometimes didn’t always act like a wave. They eventually discovered that it’s also a particle. The assumption was that something can only be this way, and not that way. But now we know that some things can be both this way and that way. So much for certainty.

“Test everything,” the apostle Paul tells us in 1 Thessalonians 5:21. “Hold fast to what is true.” Maybe it’s the journalist in me who wants to paraphrase that verse to say, “Doubt everything. Find out if it’s true.” That’s where the action is.

Thank you, Dean. Keep up with Dean via his blog at DeanNelson.net, become a fan on Facebook, or follow him on Twitter. And seriously, go find a copy of God Hides in Plain Sight. You’ll be glad you did.