Poland Gets a Really Big Jesus

Good news for people who love enormous statues of Jesus: Now there’s a great reason to go to Poland!

Swiebodzin, a 21,000-citizen Polish town near the German border, is almost finished building a gigantic Christ statue. When finished, it’ll be nine meters higher than both the largest Jesus statue in the world (Cristo de la Concordia in Bolivia) and the just-a-little-bit-smaller-but-lots-more-famous Christ the Redeemer statue in Brazil. 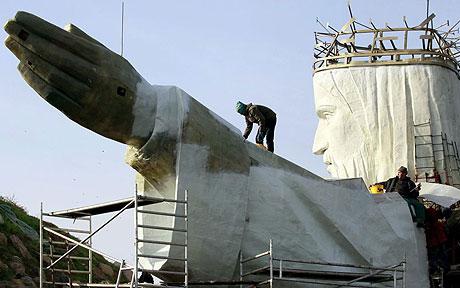 Why build an oversized statue of someone who advocated humility? Um…to get attention?

From the Telegraph article:

Although erected ostensibly to show gratitude to God, the town hopes having
the massive statue will bring tourists into a community that has lain off
the beaten track for most of its existence.

“If we had opened a racetrack or a golf course here, tourists would have
come only for the season. But with a statue of Jesus the season will last
the whole year,” a local official told Wprost, a weekly news magazine.

I love the backhanded-ness of that line: “although erected ostensibly to show gratitude to God…”

You might as well write, “Though pretending the statue was built to show gratitude to God, we all know they’re doing it for the tourism, fame, and money.”

After all, no one ever makes plans to build the 3rd largest Jesus statue in the world. There’s no reason to show gratitude to God unless you can show it better than everyone else.

As we approach the holidays, we would all do well to remember the wise words of that Polish official: Jesus is the reason for the season, and with a statue of Jesus, the season will last the whole year.