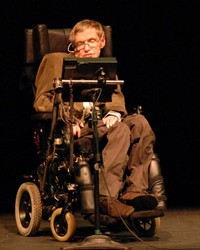 Last Thursday, in an excerpt from his upcoming book, The Grand Design, world-famous physicist and mathematician Stephen Hawking revealed that he no longer believed the universe needed a creator God. “The universe can and will create itself from nothing,” he wrote. That’s a fairly simplified statement, and one he will no doubt expand upon in the new book.

But that didn’t stop comment sections, discussion boards, and Twitter from exploding in a Big Bang of hatred and derision toward Hawking from people who DID believe in God. As a Christian, I bristle anytime other Christians are sources of hatred and derision — especially toward people “on the other team,” so to speak. (What part of “love your enemies” don’t we understand?)

Also, I’m a big fan of Hawking and his work. So I wrote a quick Guest Voices piece for “On Faith” at the Washington Post. The piece is called “Stephen Hawking says there’s no creator God; the twitterverse reacts.” Yes…it’s a really catchy title. Anyway, here’s an excerpt:

There were tweets belittling the physicist’s physical ailments.
Tweets chortling about how he’ll be sorry when he dies and meets God.
Tweets over-simplifying his ideas and then cheerfully labeling them
stupid. Tweets calling Stephen Hawking an idiot.

Like dogs backed into a corner, my religious brethren went on the attack, escalating the culture war between science and faith.

Jesus taught slowness to anger, compassion for the sick, and love for
our enemies. But even accounting for the simplicity of Twitter, and the
troll-like culture of the Internet in general, we still come across as a
bunch of petty, rage-filled monsters eager to discount the life work of
one of the world’s greatest scientists.

A genius with a debilitating disease says something we disagree with,
so we make fun of his wheelchair and laugh at his impending death.
Great.

I hope you’ll read the whole article here, and then consider the following question: What is the Christian (and/or God-believing) response to this kind of situation?

Dana Ellis: Haunted by Questions
archives most recent
More from Beliefnet and our partners
previous posts