Lauren Sandler and the Only Child Myth 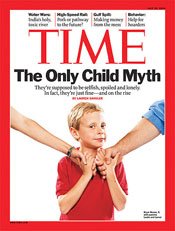 My friend Lauren Sandler, a journalist, author, and blogger, wrote the cover story for the July 19 issue of Time Magazine. Lauren, the author of the book Righteous: Dispatches from the Evangelical Youth Movement, is an only child herself. Her article, “The Only Child Myth,” has gained quite a bit of attention, both from inside and outside the world of faith and religion.

(For instance, this Christian blogger seems to be lumping Lauren in with a “culture of death” rather than the “culture of life” — just for thinking about having one kid instead of a full quiver.)

Despite the fact that she may attempt to woo me toward a dark culture, I asked Lauren if she could shed some light on the article and the one-and-done issue.

Briefly, what was the genesis of your interest in only children and how did that turn into the TIME article?

I’m a journalist, and an only child with (for now) an only child. In considering my choice to have one — or another — I began investigating both sides of the singleton question: what it means for kids, and what it mean for parents; drawing from my own experience, and my parents’, was not enough. I was chatting with an editor about Time about what I was learning about only children–it was quite surprising–and she thought it would be a perfect cover story for Time.

What are some of the misconceptions society has about only children?

We have a rep of being lonely, selfish, maladjusted. A century of studies show that we’re actually not measurably different from people with siblings — except some research shows that we tend to be greater achievers with higher self-esteem. Do social psychologists test for precociousness? Nope. And does that describe me? You bet. But in terms of the deep stigma attached to only children as royally screwed up, unbearable, egomaniacs–it just doesn’t hold water.

What were you surprised to discover in your research?

What I learned about loneliness really surprised me. We have such a visceral response to seeing a kid alone; we think they can’t help but be lonely. I wasn’t a lonely kid myself, but I always thought that was somehow exceptional. In fact, only children tend to have stronger, more developed primary relationships with themselves, and so they tend to experience solitude as loneliness less often. Of course, we all get lonely — it’s part of the human condition. You don’t have to be a French novelist to understand that. But only children aren’t lonelier than any one else, in the aggregate.

I was also surprised to find research that demonstrated that parents of one child tend to be the happiest. (This was found by a father of three, and verified by a few fathers of two.) It follows logic: you get to experience the joys of parenting, and none of the angst of choosing not to have kids, without completely losing yourself in the demands of a larger family: financially, emotional, in terms of the time we allot to others and ourselves. And yes, parents of only children have a reputation for being selfish which derives from that calculus. My parents decided that to be good parents they needed to be happy parents, and to be happy parents they needed to be happy people. Is that selfish?

How much of a role do finances play in the decision to have just one kid?

Lately, a big role indeed. During the Great Depression, when only children were hardly normative, single-child families climbed to 23% – 30%. We’re almost back at that number now. The Guttmacher Institute polled women last year and found at 64% said they couldn’t afford to have another kid in the near future.

There’s a faith angle to this story, too. Are only children less common in religious homes? Why?

I think you’ll find that among the believers, there’s a far greater impulse to say if you ant a bigger family, you’ll make it work. There’s of course the pro-life side to this story, which radically shifts the notion of family planning. And there’s also the biblical mandate, of course, to be fruitful and multiply. It’s hardly just an American Christian phenomenon, though. If you comb the World Value Survey, you’ll find religiosity and fertility go hand in hand, whether in more pious America or more secular Europe. England’s Chief Rabbi in the House of Lords, Lord Sacks, has thundered repeatedly in public sermons that “Europe is dying” because secularists and “neo-Darwinians” refuse to have enough babies to maintain the population.” Likewise, Pope Benedict recently preached to the Catholic world that secularism is responsible for Europe’s sinking native numbers.

In the US, more single-child families are secular, and more large families come form strong faith background. Hey, there’s a reason that Jon and Kate Gosselin were some of the hottest tickets on the Christian booking circuit — until they split up.

Full Disclosure: The kid on the cover, Bryar Moore, goes to school with my kids and his parents are our friends. We introduced them to Lauren and she interviewed them for the article. I’ve got all kinds of bias going on here.