Creeped Out by Guardian Angels

Two weeks ago we discussed how, among other surprises, 55% of Americans believed they had a personal guardian angel who had protected them from harm. What we didn’t discuss is how the idea of a guardian spirit hovering around me at all times is an incredibly unsettling thing to think about. Regardless of whether or not this being is benign. Or whether or not he/she/it has enormous wings. Or looks like John Travolta.

I am creeped out by the idea of guardian angels.

I believe it began with this famous painting, which used to hang in my great-grandmother’s house. After she died at the age of 97, it got transferred to my house. It gives me nightmares.

Because that angel lady is HUGE. And the unknown plot behind the painting is equally disturbing. What in the world are those little kids doing outside in the storm? Where are their shoes? Couldn’t someone get suffocated in the expanses of that angelic drapery?

I didn’t grow up with the next painting, and that’s a good thing because it’s even more disturbing.

For one thing, that angel needs to be careful with his magic nightlight, because it is far too bright. He’s going to wake up little Jimmy, and then little Jimmy is going to scream because THERE IS A GIANT BIRD-MAN IN HIS ROOM. And he’s got his face all underlit like he’s about to tell a ghost story. If I ever wake up and find this guy holding his spear next to my bed, I will never sleep again.

The next painting is more unnerving due to what the child is being guarded from rather than the one doing the guarding.

That horrible thing in the background is a torso demon. You can identify them by their bat wings, their shirtless musculature, and by the fact that they only exist from the waist up. Also, again, this kid has no shoes. If I were in charge of guardian angels, I’d give them a sack of TOMS to hand out to all these needy children they’re protecting.

Gotta watch out for the male guardian angels…

…because apparently they lurk in the sunset-y background while you are showering. And then, as soon as you step out and begin to dry off, they show up out of nowhere and attempt to put one of those Aerobie Frisbee rings around your head. I’m not sure I know what this means, but it definitely has a peeping-Tom vibe. And, thanks to the Frisbee, a college frat-boy vibe.

Some people think of God as the universe’s puppet-master, pulling strings and pushing levers and causing people and events to bend to his will. This painting tells a slightly different story. 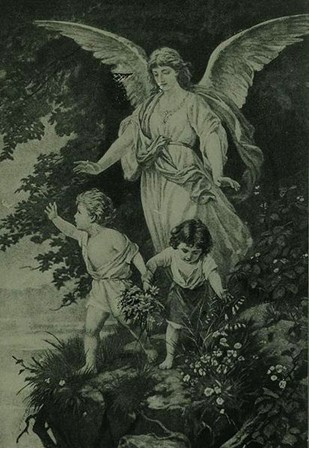 You can’t see the strings, but the guardian angel him/herself is working these small flower-gathering children like marionettes. You probably didn’t know guardian angels did that. Neither did the children, which is why this is so shiver-inducing.

So is it just me, or is there something super-spooky about guardian angel art?