Yesterday I introduced Nick Fiedler, author of The Hopeful Skeptic and co-creator/co-host/co-guy-it’s-named-after of The Nick and Josh Podcast. In part one of the interview, we discussed spiritual labeling, re-examining your childhood faith, and the possibilities of “Christian agnosticism.”

Today, in part two of the interview, the conversation ranges from the challenges of dealing with biblical inerrantists to Nick’s continued hopefulness in regard to spiritual things. And we also talk about the role an iPad might play in his (potential) return to the faith.

[JB] Any discussions of mistakes in the Bible, or even admission that humans
might have their fingerprints on scripture, can be VERY controversial in
some circles. What kind of push-back have you experienced? How do you
deal with it?

[Nick] The push-back I get when I talk about mistakes is short-lived. I try not to be a jerk about it, but I can’t continue a conversation about the Bible if I am talking with someone who says there are no errors in the Bible they are holding. If someone thinks that they Bible they are holding in their hands has the exact same words that were intended to be there originally and the translation to English happened perfectly, I have to bow out of the conversation. Thankfully most people I talk to have moved past that, but surprisingly there are still some people who hold strong to this.

I do get people that say nothing major is debatable. That’s when I have to turn to the idea of Junia, and ask them if they think that the change in her sex made in the text could alter how the early church treated women. All I ask is that people who want to talk with me about Scripture, that they are open to an idea that change happens, in people and books and religions, and to be careful when they hold words they claim are from the mouth of God. Because we all know words can loose their intent when we don’t have faces to read or inflection to hear. Ever had a miscommunication because of reading something into an SMS or an E-Mail? If I can start a conversation there, I usually have a pretty civilized conversation about Scripture.

Despite your skepticism, you have remained a person of specifically
Christian faith. What keeps you on this road? Do you see anything in the
future that could potentially take you in a different direction, or
away from it altogether?

But to get into your question, I have hope in some Christian communities. There are people doing incredible things — world changing things, all inspired by the Jesus of the New Testament. That is something I am hopeful in. I probably have blinders on, but that could potentially change. I am noticing more communities of hope in other religions and even in secular groups, but where there is something that is good and life-giving, that is where I find hope. I have historically used the selfless model of Jesus to help me define good and life-giving. But I am not stuck to that. It could change. The one thing I find constant in my life spiritually and physically is change.

What are three main points you hope readers take away from The
Hopeful Skeptic?

1) You have options.
2) You are not a hypocrite if you change your mind.
3) No one has all the answers.

Last weekend on your blog, in response to an evangelist trying to pass off a cheap tract as “the most important gift in the world,” you made an interesting proposal: you would go back to church and re-examine Christianity in exchange for someone giving you an iPad (which you would then use to immerse yourself Christian media while blogging/podcasting about the experience). What has been the response so far? Any legit takers yet?

I don’t know what I expected when I blogged about returning to Christianity, but it has made a small slash. I am surprised by a guy named Paul who commented he had suggested something previously and he genuinely wanted to make this happen. The idea is that I don’t find much worth in being associated with Christianity, and discussions about how this church or that church is remarkably different than the ones I have experienced in the past haven’t sold me.

So I proposition giving me something of value — not a promise that your church is different, not a book about postmodern Christianity — but something that takes a good bit of your time and money to give. It is too soon to tell what will happen with all this, but it looks like there are some people that are interested. My friend Tripp suggests a few terms of his own that would make him pony up the cash. ChurchRater.com has also jumped on the story and they want to challenge a church to take me up on the offer. All I can say is that I am serious, and interested to see how it will turn out.

Now for a really important question. If somehow you ended up in a situation where you had to eat the same

breakfast every day for the rest of your life, but you got to choose
what was on the menu, what would it be? (include beverages)

This question throws me off a little bit. I usually just drink way too much coffee every morning. But in high school I met up with a group of guys and twice a week we would go to Waffle House and get breakfast before school. I would always order a coffee, water, and a Patty-melt plate with the hash-browns scattered-smothered-covered. So that would be it. I could eat that every morning for the rest of my life. However, I assume it would be a short life if I had that every morning.

Thanks, Nick, for the great conversation and for a thought-provoking book. 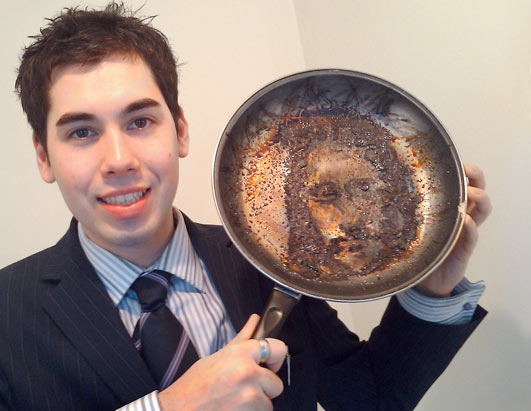