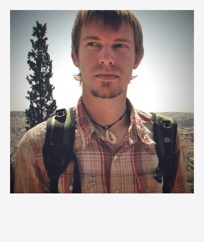 I first encountered Nick Fiedler via “The Nick and Josh Podcast,” his popular podcast with Joshua Case. They’ve been at it since 2006, and have interviewed a diverse number of authors, speakers, musicians, theologians, and other people in and around Christian culture. When Nick published his first book — a book called The Hopeful Skeptic, about becoming “post-Christian” and re-examining his faith from an outsider’s perspective — I was intrigued. So I asked for a review copy from his publisher, IVP.

I just finished the book last week and, as a fellow asker of hard questions, found it to be a fascinating read. I asked Nick if he’d be up for an interview here and he graciously obliged.
——————
[JB] For those unfamiliar with the book, can you describe what you mean by labeling yourself as a “hopeful skeptic”?

[Nick] Labeling is a funny thing. We usually don’t like it when people label us, but we use labeling systems for everyone else, and in most aspects of our lives. In order to make it easier for people to not get confused labeling me as either a ‘Christian’ or a ‘Non-Christian,’ I thought I would help other people out.

I have a lot of questions and doubts that would make a good number of Christians count me out of their group. Because of that, I tried to find a way to define myself outside of their labeling system. I combined the two largest aspects of my spiritual and mental life. The doubt side of my brain — the side that is ultra modern and enlightened in the classical sense — I called a skeptic. But the large field of skeptics wasn’t something I was completely at home with, so I combined that word with ‘hopeful’ to emphasize the hope that I find in the life of Jesus, and the hope that I find in thoughts that point us outside ourselves. I married the two terms and it stuck.
Now I feel like my label is an accurate one that no one has to argue for or against.
The Christianity-as-an-arranged marriage metaphor that you use at the beginning of the book is a powerful one. Lots of us grew up in those kinds of automatic faith structures. What can we gain by re-examining that relationship? Is this something you think everyone who has “grown up in the faith” needs to go through?

I don’t know if I am the first person to use the arranged-marriage metaphor, but a lot of people are telling me that they have never heard it put like that before. I agree with you, I think that a lot of people have grown up in a belief structure, and I think that most of us follow in the faith of our fathers (and mothers). I think the key process we need to go through is acknowledgment of that.

I would never ask someone to leave the faith of their parents just because it is their parents’ faith, but I think we all need to do the mental work of finding out why we believe what we believe and own the part of it that is solely inherited. Many of us have created our own belief structure, but some of us may be in a belief system mostly because it was what they grew up with. I think we grow in maturity when we challenge ourselves to find what is uniquely us and what we just held on to because we received it growing up.
And yes, I think this is something that everyone should go through, even if the end result is finding that they are just like their parents.

You admit to liking the humility of agnosticism — the idea of going through life admitting you could be wrong — and admit that you have something of that spirit in you. Can there be such a thing as a Christian agnostic?

I absolutely think there can be Christian agnostics. I have met plenty of them. I have one friend in particular who wrestles with the existence of God daily, but couldn’t be more devoted to the Christian story. I think the reality of the situation is that even though there are plenty of Christian Agnostics, we wouldn’t admit it out loud. If we define ‘agnostic’ in a general sense of the word, we can think of it as having no completely sure knowledge of God. Every Christian, at some point in his or her life, has got to think “God are you really there?” or “God is this really true?”

In my mind, a Christian agnostic realizes they can’t always believe everything 100%, but they trust in their overall belief in the Christian story. I think we just don’t admit it all the time.
If you asked me if I believe that my wife always told me the truth, I would say yes. But do I think that in four years of marriage that there hasn’t been some form of deception? Well, I can guarantee that there has been. I know it for a fact. On multiple occasions, there have been deceptions to throw me off the track of secret parties and gifts. Whereas I won’t identify myself as a wife-truth-agnostic, I am a realist (I think), and I know there will be misleadings. People get hung up on the negative label of agnosticism and don’t realize that we all have moments of it.

One of the big belief categories you re-evaluate as “major skepticisms” is your relationship to Scripture. I’m always surprised (and disappointed) how little people know about the Bible, including textual and historical criticism. Why is it important for Christians to study the Bible beyond a surface-level devotional reading?

I think the biggest problems that Christians have when it comes to the Bible is they have no idea how to look at it objectively. This isn’t completely their own fault. They are taught things very concretely about the Bible and I would venture to say that the majority of the church never gets a secular history of the Bible.

If we aim to build our life around a book, I think we need a few tools to do that. Some of the major tools would be an adequate history (as much as could be possible), an understanding of ancient literature, and an unbiased viewpoint. I have no problem using the Bible in a devotional context — that’s great. I use plenty of things in a devotional/meditative context, but I want to know more about the nuts and bolts of something before I build my life around it, and I want to get an outsider perspective of anything I study.
Sometimes a pastor with his or her point of view is not the best person to learn the history of the Bible from. This isn’t an area where I would say get rid of your Bible, your traditional understanding of Scripture, or your pastor. This is an area where I would say, ‘dig deeper’ — and not in the same place you have been digging.
——————
Come back tomorrow for part 2 of this interview, in which Nick talks about dealing with biblical inerrantists, whether or not he should be identified as a Christian, and his willingness to re-examine the Christian faith if you’ll give him an iPad. (Yes, he’s serious.)
Buy The Hopeful Skeptic
Follow Nick Fiedler on Twitter
Subscribe to The Nick and Josh Podcast

Caption Contest: Out of the Frying Pan...
archives most recent
More from Beliefnet and our partners
previous posts