Six Jesus Statues That Creep Me Out

Jesus statues: Like MTV reality shows and limericks about an island south of Cape Cod, rarely are they made in good taste. Occasionally they are just plain disturbing, as in these examples…

This 62-feet high sculpture of Jesus rises out of a reflecting pool near the 3,000-member Solid Rock Church in Monroe, Ohio. It faces I-75, and is supposed to be Jesus with his hands raised in post-Resurrection worship. But the placement at the end of a reflecting pool doesn’t exactly say “Glory to God” so much as it says “Help! I’m drowning.”

Some people might be taken aback by the a bit-darker-than-typically-Jewish olive skin tone of this Jesus, or by the frilly lace undergarment he seems to be wearing beneath his royal purple robes. But me? I’m concerned that, in addition to his crucifixion wounds, his head has clearly been pierced by trident-shaped weaponry. Had there been ninjas at the crucifixion, I could have gotten a lot more of my elementary-school friends to visit Sunday School with me.

No idea where this Jesus statue comes from, but that’s OK, because I’m not sure I need to see it in close proximity. 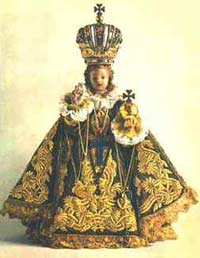 Toward the beginning of the 17th century, a statue of the infant Jesus was given to a group of discalced Carmelites in Prague. The donor was a Spanish princess who’d received it as a wedding gift. The Carmelites set it up at their monastery, and performed special devotions to it twice a day until the monastery was plundered in 1631 by a bunch of Lutheran Protestants during the 30 Years War. The statue was thrown into a pile of trash behind the altar, until seven years later it was joyfully rediscovered. Today you can see it at the Church of Our Lady Victorious in Prague — along with a number of ornate outfits that have been made for it over the years.

Yes. Outfits. According to the stories, this little baby Jesus statue protected Prague during the 30 Years War. And today, those who pray before this statue of baby Jesus can expect blessings, healings, and spiritual favors. So people love this statue, and make clothing for it.

Of course, baby Jesus would have come from a working-class village, and probably wouldn’t have been caught dead in these fancy duds even on the day the Magi arrived. And anyway, there is no way such a wide robe would have fit in the manger. Who puts babies in that kind of twerpy clothing anyway? One leaky diaper and you’ve ruined a good tapestry.

And according to most parenting magazines — and basic physics — you’re not supposed to put gigantic crowns on the heads of infants, especially during those first few months when they have weak little necks. Sheesh.

Look, I’m pretty sympathetic to Catholicism. Have some good friends who are Catholic. Love the Catholic devotional writers like Manning and Nouwen. Really appreciate the Benedictines and am a huge fan of the saints. (The religious ones, though the football team’s OK, too.)

But I’ve never understood the Sacred Heart of Jesus devotional statues and paintings. The hand and feet wounds are disturbing enough. I don’t need Jesus calling my attention to his open chest cavity and the apparently still-beating heart located inside it. Even if that heart is beating for me. And even if mystical light is shining forth out of the aorta and even if the whole thing is surrounded by a tiny little crown of thorns. Because, I’m sorry, that’s weird.

For what it’s worth, the whole Sacred Heart of Jesus devotional theme — which is supposed to call attention to Christ’s love for humanity, and encourages me to show my own love and adoration for him — seems to have begun with a series of visions experienced by Sister Marguerite Marie Alacoque, a mystic French nun in the 17th century.

For its 50th anniversary, Our Lady Immaculate and St. Philip Neri Catholic church in England wanted a contemporary-looking statue of Jesus to be placed 100 feet up in the air near the top of the church’s bell tower. So they commissioned a barefoot Jesus who was wearing jeans and a mostly unbuttoned dress shirt to match his artfully unkempt hair and trimmed beard. And also, apparently, he needed to look like he was riding an invisible skateboard. And also, it was windy.

Why? Because the church “wanted a figure of Christ not in suffering but dynamic and welcoming.” And nothing says Welcome to Our Church like a levitating sk8tr boi Jesus in a hurricane.

6. Jesus You Should Take a Step Back From

During a spectacular lightning storm in Rio de Janiero in February 2008, the world’s largest Jesus statue, Christ the Redeemer at the top of Mt. Corcovado, got struck by lightning. Sure, there’s that whole thing about lightning striking the tallest structure in an area, but let’s ignore basic meteorology to get to the confusing theological implications of this event. Like: what does God have against giant Jesus statues, and why?

Question for the crowd: Have you ever seen a Jesus statue you actually liked?