The Kid on the Cover

I’m no investigative journalist, but I’ve got skills, and Twitter, and email, and every once in awhile I can come up with a pretty sweet scoop.

Which I have done today: I’ve identified the kid on the cover of O Me of Little Faith, and uncovered the intriguing backstory behind the band-aids, the pose, and the awesomeness.

The little dude’s name is Drew and he’s 8 years old. Drew’s mom and dad own an advertising agency in Grand Rapids, Michigan, and one of their clients is the Grand Rapids Marathon. In the spring of 2008, they were shooting campaign images for the marathon with photographer Steven Wohlwender. Wohlwender is a distance runner, and so was the agency’s creative director.

(Sidebar: As you might know, the constant bounce of running a marathon can occasionally cause some, well, chafing of the nipples. So a lot of male marathoners will put tape or band-aids over these delicate areas to keep them safe during the event.)

Anyway, according to Drew’s mom, the photographer and creative director got to talking about how funny it would be to take a photo of a little kid wearing the band-aids. The Grand Rapids Marathon has a kids’ marathon, in which kids commit to walking or running a mile three times a week for eight weeks (accumulating 25 miles), then on race weekend they run/walk the last approaching the 1.2 miles of the race course — making them official marathoners. What if they photographed a kid approaching his marathon with the same intensity as an adult? And taking the same precautions an adult marathoner might take against the painful injustices of endurance sports?

They decided it would make for a really funny picture, but the light was waning and the shoot was practically over. Where could they find a kid whose parents would consent to a photo shoot at such short notice? Especially a photo shoot in which the child was shirtless? Lucky for them, the agency’s owners had such a kid: Drew, who was 6 at the time.

They hurried to the drugstore to buy some SpongeBob bandages and finished up the shoot in the remaining natural light. “Steve just asked Drew to make his fiercest face, and that’s the picture that you see,” Drew’s mom told me. The original photo — in which Drew was wearing a bib from the kids’ marathon (it’s been Photoshopped out in my cover) — was used to advertise the event and eventually was discovered by the design team at Zondervan, which is located, of course, in Grand Rapids.

Here’s the original photo of Drew by Steven Wohlwender. You can find it in the portraits section of his online portfolio: 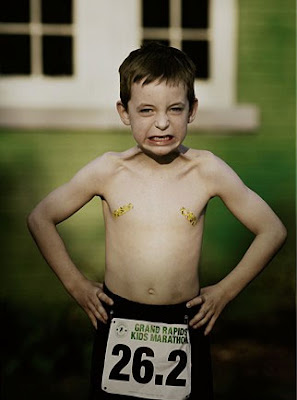 And here’s the book cover: Drew’s mom said he doesn’t know about the book cover yet, but he’s already enjoyed his 15 minutes of local fame from the marathon advertising. I guess those few minutes are about to get extended a bit.

Drew us now in second grade and is a Cub Scout who loves guitars, music, swimming, and Legos. Sounds like my kind of kid. I’m thrilled to have him as my scrawny, fierce book cover representative.

Right now at Amazon, you can get O Me of Little Faith AND Hear No Evil AND Jon Acuff’s upcoming Stuff Christians Like in a great package deal: all three books for just $27.63. I smell a delicious pre-order.