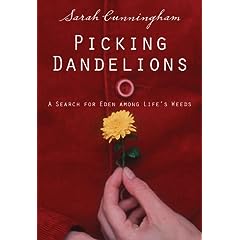 I like to read stories about interesting people. And I like to read books by excellent writers–the kind who, technically, are very good at their craft. When a gifted writer happens to be an interesting person with compelling stories and a creative perspective, then that’s a book I will enjoy and recommend.

Which brings us to Sarah Cunningham and her latest book, Picking Dandelions. Short review: She’s a great writer. She’s an interesting person. She’s got excellent stories to tell and makes thoughtful observations about contemporary Christianity. I loved this book.

Sarah first caught my attention with her first book, Dear Church, in which she drew on her church-staff experience to write 14 letters to the capital-C Church–a Church she wasn’t entirely sure she wanted to be part of. She was impassioned, disillusioned, and discontent with the business-as-usual approach to church. She became a fresh voice for a generation of believers who thought the Church should be more than a Sunday morning social club.

While Dear Church was passionate and raw, Picking Dandelions is warm and mature. In it, Sarah sets aside the letter-writing approach and transitions into a straight-up spiritual memoir. It’s funny, honest, and instructive, as she tells about the virtues of searching for Eden–of finding hope and goodness and God–amid the messiness of life. And she’s seen messiness. She’s lived in a homeless shelter in Chicago. She worked at Ground Zero in the days following the 9/11 attack. And she teaches high schoolers in Michigan, which is really scary.

With the nationwide release of Picking Dandelions, I got a chance to email-interview Sarah about her new book. 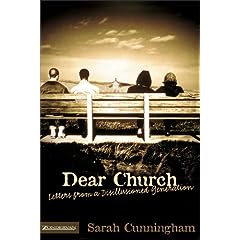 Sarah Cunningham: Man. For starters, I stopped whining about church experiences gone wrong. I got sick of my own immaturity. And then, another noticeable one: I got pregnant with our first child. Mostly, I think I just kept growing up. By the end of Dear Church, I was already starting to make a shift away from being “disillusioned” to a person who could find goodness “beyond disillusionment.” Picking Dandelions captures part of that stretch. Picking Dandelions will never be done for me though. I’ve still got a lot of changing left to do.

A lot of us think of transformation as something that happened in the past…maybe at the beginning of a life of faith. But you look at it as something that should be constant, right? Why should we, as Christians, always be changing–or as you call it, “converting further”?

Wow. There are a lot of ways to answer that. One would be to say that, from the beginning–from Eden–God intended good for us. Along that same line, Jesus said he came to give life to the full. In light of those two statements, who wouldn’t want to experience more of the fullness he wanted for us?

As we try to adopt more of God’s way of life, its going to pull us forward into change. And change in this case, may be hard, but it will be good.

I’ve always thought the designation between “desired plants” and “weeds” to be entirely subjective and unfounded. Who ever decided that a cute little yellow dandelion was a weed? You’re pretty pro-weed in the book–no, not THAT kind of weed–so I thought you might be able to explain it.

Ha ha. Yeah, I’m pro-weeding especially. The more we cut out unhealthy things that grow up around us, the more room we have for the good things to grow.

I think I identify with the dandelion especially. Its this intense, fuzzy flower that brings wonder to children, but it still has some of the characteristics of a weed. And that’s me in a nutshell. I’m intense, driven, want to nurture goodness for other people, but in the end, I’m also a really flawed and dysfunctional human being. The cool thing is that when we begin to recover God’s intentions for us–to recover Eden, you might say–even the weed-parts of us end up looking pretty beautiful.

Speaking of which, I love the section where you talk about your flaws, which always reminds me of the Apostle Paul going on and on about how he boasts about his weaknesses. Is it hard to write so transparently about your personal failures and shortcomings? Or is it empowering for you?

Its not as hard as you might think. There comes a time in any person’s life when they decide who their public self is. Are they going to keep their spiritual and personal life private? Or can that be shared with those who share your life? Because my dad is a pastor, its always been natural for me to include a wide group of people in my development. Now, it just seems like I’ve extended that openness to the general public. Its sorta like going ALL-IN. This is who I am, good or bad, when no one is looking…and when everyone is.

Being open about your shortcomings can also be freeing. You’re not pretending to be anything you’re not. You’re not projecting yourself as perfect. It allows people to take you as you are.

And being transparent can also help me step up in my life. Right now, I’ve been blogging about forgiveness on my website. For me, that’s fresh; its one of those areas where I need to grow so badly it stings. But putting it out there is also like cementing the actions I’m trying to take.

I love that this book doesn’t feel like a sermon repackaging (which I always assume is the case when reading new Christian books by well-known pastors). You’re a good writer and storyteller and a great prose stylist. You do the memoir thing very well. So, now that all that praise is out of the way, what are some of your favorite memoirs? When you’re writing these personal stories, do you ever find yourself trying to channel certain writers?

Thanks. I felt like it was a little bit of a dice roll. One of my favorite memoirists is Anne Lamott, but I didn’t know if I c
ould tap into that genre because I come from the exact opposite place on the spectrum. I was raised in an ultra-churched family on the right wing. When it comes down to it, I’m the clean-cut lily white girl from the midwest. But I want people to know that, whatever their context, life can still be quirky and funny and you can still laugh at yourself while you sort through the messes of your life. That is not limited to people raised on the left wing or the west coast. It’s a universal experience for all of us who search for God and for meaning among life’s weeds.

The stuff about Ground Zero is one of the most powerful parts of the book. I don’t want to give anything away, but the idea of searching for Eden at such a place of devastation makes for a really compelling narrative. Was writing that part of the book difficult? Mentally speaking, is it hard for you to go back there? Or is writing about it cathartic?

Ground Zero was a crazy experience. The whole time we were there, it felt like I had been cast in a real-life disaster movie. I would look around and think to myself, this moment right here, this block I’m standing on, it is going to be in the history books. Surreal.

It wasn’t hard to write about Ground Zero this many years later, but it was hard to absorb the experience into the rest of my life back then. When we were at the site of the World Trade Center towers, we were living on adrenaline the whole time, working through the night, watching people slip around the rubble. People were literally buried under concrete. It was all emergency-level. So it was weird and almost disturbing to come back to Michigan and realize the rest of the world was still functioning normally.

And I think, more than cathartic, talking about 9/11 is meaningful to me. Its important to be able to say to other people, even in life’s darkness, there is light. Even in devastation, God stirred goodness.

You write about having had a “boiling lake of magma” in your front yard. I love this, because I had one, too! It was in our living room, and we could only cross it using the couch cushions and a couple of well-placed pillows. This isn’t a question. I just wanted you to know.

I’ve been surprised by the reader reaction to our lava-jumping. Apparently all of us had boiling lava pits in our yards. Who knew the U.S. was built on an ocean of underground magma?

Did you get everything off your chest with Dear Church? Or is there another letter you’d perhaps like to write, maybe something that has developed since that book released?

I think you continue to learn about how to live and be church as life continues. But I don’t need to write any more letters for Dear Church. That book stays true to who I was then; it’s a true reflection of being in your twenties and trying to find a church that reflects all your ideals. It’s meant to connect with people in that stage of life, so I’m not going to project any of my 31-year- old or older self into it.

What’s next on your plate? Do you have another book or idea in the works?

I toy with all kinds of ideas, but I do have an idea for a second memoir–in the voice of Picking Dandelions, but without the growth metaphors. It would be about the bond God intends between his followers.

Thanks for the interview, Sarah! Stay tuned, because at some point next week, I’ll be giving away a copy of Picking Dandelions.

• Get a $10-off coupon code from Zondervan, which means you can get Sarah’s book for $4.99 if you buy it through Zondervan.com.

• Disclaimers: Sarah and I share a publisher. Zondervan provided me with a review copy of Picking Dandelions. I feel an affinity with her due to the lava pits connection. I also have warm feelings about anyone with the last name “Cunningham” due to my childhood fondness for Happy Days.

read next post
Enough about Me: 3 Questions for You
archives most recent
More from Beliefnet and our partners
previous posts