Earlier this week I revealed my childhood love for dinosaurs. And as a kid growing up in a devout Christian home, I also harbored a childhood love for Jesus. Some of my first real spiritual questions came when I wasn’t able to fit my beloved dinosaurs into the biblical narrative.

Too bad I didn’t have these religious dinosaur pictures to inform me. Because they sure would have made me feel better about things.

The Most Awesome Picture Ever:

This is actually a fine art print available from an artist named Derek Chatwood. But the really sad thing is that, when I first saw it a couple of years ago, I wondered for a long time whether it was real. A long time. Because I would absolutely not be surprised if coloring books like this actually existed from Answers in Genesis or some other such Young Earth creationist organization. (H/T: Josh Hatcher for the reminder)

The Second Most Awesome Picture Ever 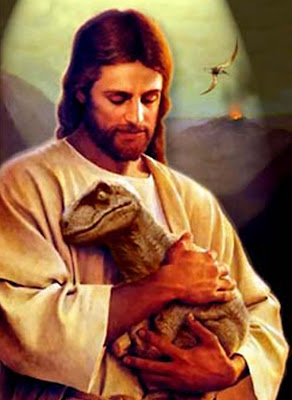 I have no clue about the origin of this one — if you have any idea let me know — but it’s wonderful. That baby dinosaur looks so content in the arms of Christ! All creatures great and small…including juvenile killing machines from the late Jurassic period.

Anyway, when I’m down in the dumps, I always picture myself as a baby Allosaurus leaning my carnivorous head against the sturdy chest of an anglo Messiah who clearly brushes his long hair. It helps.

The Ark Must Have Been a-Rockin’ 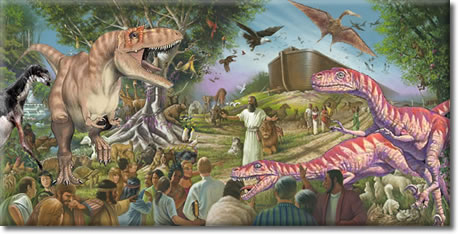 The big Creationist/Young Earth idea explaining dinosaur fossils is that most of them are the result of the biblical flood. But since the Bible says every creature “that lives upon the ground” was represented on the ark — and because organizations like Answers in Genesis insist that the dinosaurs were still alive at the time of the flood — they conclude that dinosaurs were on the Ark, too.

So obviously, the biblical ark-boarding scene would have looked just like above. The T.Rex will lie down with the lamb, etc.

This isn’t specifically a religious picture, but I love it all the same. It’s a typical dinosaur-size comparison chart like you’d find in a textbook. These images always compare dinosaurs to the size of an adult male. So you have dinosaur silhouettes situated next to a man-sized silhouette, who, inexplicably, is always waving at the camera.

Trust me: if you are within 12 feet of a line of five different bloodthirsty predators, all of whom are leaning toward you with mouths agape, it would probably serve you well not to stop and wave at the camera.

Unless, of course, you’re Jesus. The logical conclusion, then, is that the unspeakably calm blue figure in these illustrations is the Son of God.