12 Things I Learned Recording My Audiobook 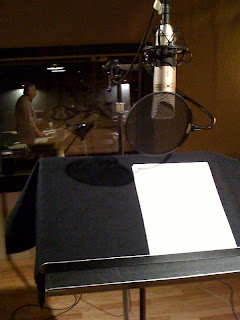 I spent several hours on Tuesday and several today recording the unabridged audio book version of O Me of Little Faith. It wasn’t my first time in a recording studio, but was definitely my first time to record an audio book. I learned some things in the process:

1. Never, ever write a book that includes long names like Zoroastrianism or Mictlantecuhtli if you plan to read it aloud some day. One of my chapters uses Zoroastrianism and Zoroaster about half a dozen times apiece. My goodness, this was a big mistake. Eventually I just started saying “Zorizzle” and “Z-dog” as replacement words. My apologies, Zondervan.

2. Voice acting is hard work. Man. I can’t believe how worn out I am. Today’s session took about four hours. Five chapters. 90 laser-printed pages. And I’m exhausted. My legs are tired from standing for four hours. My neck hurts from looking slightly downward at my pages. My throat muscles are fatigued just from all the talking. If ever in my life I have spoken ill of you, people who read audio books, I totally take it back. I’ve daydreamed before that voice acting would be a really cool job to have. I’m rethinking that now. I ran five miles last Saturday. Today I read five chapters of my own book. I’m feeling a lot worse today.

3. I worried the whole time about how sarcastic my voice sounded. I think my natural cadence and inflection tends toward sarcasm, so I tried to be aware the whole way through. You don’t want the serious stuff to sound like I’m saying it in the midst of an eye-roll and a thought bubble that reads Snerk. No idea if I succeeded at this or not.

4. I can pronounce the name Keirkegaard just fine. But I used the name way too much. Should have gone with a lot more hes and hims. Otherwise, I sound like a philosophy show-off.

5. I’m probably one of the least twangy Texans you’ll meet, but if you do hear a twang, it will occur in a word with a hard a-sound. Like day. Or away. Or ballet. (Not that I ever mention ballet in my book.) Also, I drop a lot of gs. Were I a rapper, this would be awesome, because it means I’m spending a thousand bucks at a time, frequently. Droppin’ Gs, yo. But as a Texan, it means I say writin’ and hopin’ and dancin’. (Not that there’s a lot of dancing in my book, either. Other than my recap of that decade when I was into modern jazz.)

6. I’m just kidding. I was never into modern jazz.

7. Why do I keep talking about dance? Who let that rabbit in?

8. Footnotes are awesome when you’re reading silently. They let you interject a little nugget of explanation or weirdness or humor into a paragraph without disrupting the flow. But when you’re reading aloud, footnotes are completely annoying. With some of the footnotes, I tried to work them into the text in as unobtrusive a way as possible. But most of them I just dropped completely from the audio recording. It just didn’t work to try to wedge them in. So if you only listen to the eventual audiobook, be aware that you’re probably missing some cool stuff.

9. In the turtle chapter I keep saying the phrase “first turtle.” But when you say it without precise pronunciation of those t-sounds, it sounds exactly like “first hurdle.” Which actually works in the context of the book, so I guess that’s OK. But for the record, I never use the word “hurdle” in the book. It’s always “turtle.”

10. When you write (Crickets) in a solitary paragraph, in the context of sudden silence, it totally works. When you pause and say “Crickets” aloud, it sounds completely stupid.

12. If you are one of the four or five people who called me today and got my voicemail, it’s because you called while I was reading into a microphone, passionately and with great inflection. But you should know that, despite my ear-covering headphones and despite the fact that my phone was set on vibrate and sitting on a table 15 feet behind me, I could still hear the “incoming call” buzz as I read. I could hear it! And it was ridiculously distracting. So when you hear me stumbling over Zoroastrianism, just assume it was your fault.

Actually, recording my audiobook was a lot of fun. The first half of each session, before the fatigue set in, was great. And I’d rather be doing that than digging ditches, or working in a factory, or teaching 13-year-olds.

Thanks, Carlos at Audio Refinery.