Books I Have Written, Plus Commentary

I can’t believe I’ve never posted about this before. I’m a writer, for Grisham’s sake. I write books! Shouldn’t there be a blog post where I give an overview of all those books?

Yes, there should. Preferably in the form of a list.

Should it be post #271 in the history of this blog? Apparently so. Silly, silly stupid Jason.

Books I Have Written (In Order of Appearance)

1. Cheap Ways to… (2003) This was my first real book. Not long after I began writing for Relevant Magazine (still in its 850 Words-only and dot-com phase), Editor Cara asked me to consider joining a few other writers to co-author a fun little book on how to do things cheaply. As I recall, we each were asked to come up with ideas of things to do. Then we compiled our ideas, separated them into categories, and chose from that list. Each author wrote about 7 chapters or so. The co-authors were Josh Hatcher (with whom I’ve pretty much lost touch except for Facebook), Katie Meier (who became and remains a good friend during the process), and Margaret Feinberg (yes, that Margaret Feinberg).

2. Things You Should Know by Now (2003): My first book with just my name on it! In the process of writing Cheap Ways to…, Relevant asked me if I had any other book ideas. Yes! I said. Then they asked me what those ideas might be. Fifteen minutes later, I’d come up with a list of five or so. They liked this one: an advice manual for people in their twenties. About all kinds of random stuff. This was not long after Alexandra Robbins’ and Abby Wilner’s Quarterlife Crisis came out, and at the time there wasn’t much in bookstores talking about that transition period between college and adulthood. TYSKBN did. It had chapters about not getting into credit card debt, using proper grammar, making smoothies, and cooking eggs. And lots of other things. Very random. And definitely a first book. Not a career-maker by any means.

3. Spiritual Journeys: How Faith Has Influenced 12 Musical Icons (2003): Another collaborative effort. Along with several other Relevant writers, I was assigned a couple of chapters (plus the Introduction) in this book exploring spirituality as it related to some current music-world heavies, including Bono, T-Bone Burnett, Johnny Cash, and Lauren Hill. My assignment? Moby and Sean Combs. That’s right: Puff Daddy (as he was known back then, prior to the P. Diddy/Diddy phase). Ten years ago, had you asked me if I would ever contribute a book chapter about the religious leanings of a big-time rapper/producer, I would have responded “That’s right I will!” and given you a fist-bump. Because: obviously.

4. A Guy’s Guide to Life: How to Become a Man in 208 Pages or Less (2004): When Katie Meier published A Girl’s Guide to Life in early 2004, I pitched Transit/W Publishing on a companion book directed at teenage guys. On the strength (?) of my experience as an advice-giver for TYSKBN, I got the job, and this book resulted. It was a fun book, because I was able to write very casually (it’s for teens) and very frankly about s-e-x (again, it’s for teens). This book has been my most consistent seller, year-to-year.

5. Pocket Guide to the Apocalypse (2005): This is the book where I began to discover my wheelhouse — the place where religion, history, and snark come together for an awkward tango of educational fun. It was actually one of my original five book ideas for Relevant (see #2 above), and we decided to do it while the Left Behind series was still a publishing behemoth. The overall success of the book probably wasn’t due to either the popular subject matter or the writing, but to two other things: 1) Jerry Jenkins, of Left Behind co-authorship, graciously gave me a killer endorsement (“This guy is gonna be SO left behind.”), and 2) Wal-Mart decided to stock it in their stores nationwide. God bless the Wal-Mart book buyer. To date, my biggest seller, and the initial reason I ended up on some TV shows.

6. Pocket Guide to Adulthood (2005): Because Apocalypse was suddenly popular, Relevant wanted to put out another Pocket Guide book as soon as possible, hoping to ride those coattails and have an answer when Wal-Mart said “What other Pocket Guide books do you have?”. So we repackaged TYSKBN and turned it into this book. Over three weeks’ time in the spring of 2005, I condensed several Things chapters, removed a few, and added several more. Honestly, I wasn’t thrilled about wrapping this book in the Pocket Guide brand. Even back then I envisioned it becoming a religious/historical series, and I thought this advice-y approach would confuse the brand. Releva
nt and I argued about it, but eventually I gave in. Because it was a chance to find new readers of TYSKBN, and to be honest, a chance to make a little more money. How often do writers like me get a chance for a reboot? Rarely, I guess, but in retrospect, probably not the best decision.

7. The Relevant Nation (2006): Another collaborative effort. This was a compilation of profiles of people under the age of 40 (activists, artists, celebrities) who were doing cool faith-related things. I was one of at least a dozen other contributors, so I rarely count this as “one of my books.” But anyway, it makes the list. I profiled Aaron Walling of Healing Waters International, Scott Hancock of the Glue Network, and someone else I can’t remember. (I don’t have the book with me right now. Sheesh, my memory must be failing.) Special tidbit: I came up with the title for this book. 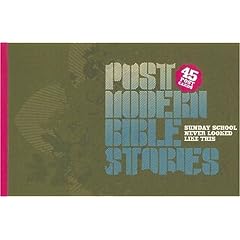 8. Postmodern Bible Stories (2006): This was a really cool Relevant book of tear-out postcards. Each one was a graphic-design interpretation of a specific Bible story by an up-and-coming artist. I wrote all the text for this book, but my contribution somehow went uncredited in the publication process. I was very disappointed about this, because 1) I worked hard on the text and had to read and summarize a whole lot of Bible stories for it; and 2) It was pretty cool, stylized stuff and I’m proud of it. But I’m trying not to be bitter, because I got paid for it and it was fun. Outside the Relevant staff at the time, I’m pretty sure no one knows my contribution to this book. Until now, I guess.

9. Pocket Guide to the Bible (2006): In my mind, the first real follow-up to Apocalypse and the Pocket Guide brand. I’ve talked a lot about this one so I won’t bore you with much description, except to say this wasn’t my first choice for the 2nd Pocket Guide book in the series I envisioned. I wanted to do Pocket Guide to Sainthood, but Relevant thought that title/subject would be “too Catholic.” I disagreed. Regardless, I now own the rights to PGTTB and am selling it out of my trunk (see sidebar) until it’s republished this summer by Jossey-Bass…along with two more brand-new Pocket Guides, one of which is, yes, “too Catholic.”

And that, friends, is the brief history of my publishing career. It looks like I haven’t been doing much since 2006, book-wise. That’s not exactly true, because I started writing the Sainthood book in 2007. We just wanted to release all the Pocket Guides at once, to kick-start the series.

Which of my books have you read? Will anyone admit to having read all of them? If so, I will give you the entirely lame distinction of being my Biggest Fan Ever and give you a special prize. Unless there are, like, 30 of you. I don’t have that many prizes. But we could start a club.

Did You Know? (Vol. 1)
archives most recent
More from Beliefnet and our partners
previous posts