One of my former TrueU editors, the current ski bum Matthew H. John, reminded me last week about an article I wrote last Christmas for the now defunct webmag. It was called “My Favorite Christmas Story” and it’s about a parable that’s not usually associated with Christmas (but should be). Rather than send you there, I’m gonna reprint the whole thing here. Including the footnotes.

Elfin Dentists, Miraculous Trees, and Vampires
This is a wonderful time of year for people like me who look forward to those days, right after Thanksgiving, when we can finally do the thing for which we’ve been waiting month after month after hot, summery month. Lug out the Christmas decorations? No. Pop in the John Tesh Christmas album? Nope. What I’m talking about is far more meaningful than either of those things: it’s watching old television Christmas specials. 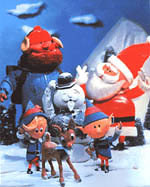 With a spacious DVR and a broad selection of channels, a person can really stock up on Christmas programming during the month of December. My kids are young, so over the last few years I’ve enjoyed introducing them to some of the great televised Christmas stories of my childhood — which, trust me, were already old when I first saw them. These include the following:

Rudolph the Red-Nosed Reindeer, the classic, stop-motion, Rankin-Bass production, featuring brilliant performances by Hermey the Elf (who really just wants to be a dentist), Yukon Cornelius (the crusty old prospector), and Bumble (a supersized Yeti who gets his scary teeth extracted by Hermey). Good times.

How the Grinch Stole Christmas, the animated Dr. Seuss cartoon, not the one with Jim Carrey. Because: ick.

A Charlie Brown Christmas, which is probably my favorite. Reason #1: It’s always refreshing to hear an unvarnished retelling of the Christmas story, right out of Luke 2. Reason #2: It always cracks me up when the entire gang starts to sing, at which point their heads tilt back, their mouths open wide, and we get a full-on look up their noses. Reason #3: The mystical transformation of that scrawny stick of a tree into a thick, lush, full-blown masterpiece of holiday décor, simply because a scrum of kids descended upon it and started waving their hands around. It’s like miraculous group tai-chi!

My kids love the three specials above just as much as I do. There are others on my favorites list, however, that the kids don’t get to watch, like the 1984 film version of A Christmas Carol. George C. Scott is a fantastic Scrooge and I’ve yet to see a more nightmare-inducing Ghost of Christmas Future. Then there’s “Amends,” the classic episode of Buffy the Vampire Slayer, which tells a story of forgiveness, grace, and resurrection, concluding with a Christmas miracle (snowfall in Sunnydale!). But it also includes, you know, vampires and vampire slaying, which the kids aren’t quite ready to add to their holiday viewing schedules.

Anyway, enough nostalgia. We’re awash in Christmas stories this time of year. You have your favorites, and so do I. But there’s one Christmas story I return to every season which never seems to get any press. Not on TV. Not in the children’s books. Not even at church.

Nevertheless, it’s a story you know well. You can read it for yourself in Luke 15. It’s the parable of the Prodigal Son. But before we get to it, let’s talk about the incarnation.

The Incarnation: More Than a Breakfast Drink
What comes to mind when you think about Jesus? If you’re like most evangelical Christians, your answer probably has something to do with the things we celebrate at Easter, the other big Christian holiday. We think of the cross, perhaps. We think about forgiveness and about Jesus dying for our sins. We think of the resurrection and the gift of eternal life. And you know what? Those are good things to think about. No problems there. In fact, Paul makes it clear in 1 Corinthians 15 that, if Jesus didn’t rise from the dead, our faith is useless. The Christian faith pivots on whether or not the resurrection really happened. In terms of importance, it’s hard to beat that.

But if there’s any downfall to our evangelical emphasis on Easter, it’s that we’ve unconsciously shipped the Christmas story off to second place. We talk about the resurrection all the time. But the incarnation? The story of the Christ child, Emmanuel, “God with us”? Other than during these few weeks at the end of the year, the first coming of Jesus gets scant attention. Maybe it’s because the entire concept is pretty hard to wrap our minds around. The theological idea that Jesus was 100 percent man and 100 percent divine doesn’t exactly lend itself to one of those handy charts in the back of our Bibles, right before the maps of Paul’s missionary journeys. It doesn’t play well on Flannelgraph, either.*

In fact, I’d be willing to bet that, while almost any churchgoer can tell you the significance of the resurrection, a surprising percentage wouldn’t even be able to define the word incarnation.*

And that’s a problem. Because without the incarnation — without God becoming flesh and dwelling among us — you don’t get to Jesus. His life and death don’t mean much if He’s not fully man and fully divine. The resurrection doesn’t happen if He’s not God with skin on. Which means you wouldn’t be too far off in identifying the incarnation as the central point of the entire Bible.

Then why, upon hearing the word incarnation, are we more likely to think of a flower or a breakfast drink* than the mystery we celebrate at Christmas?

The Father’s Full-Speed Hug
If the incarnation is the story of God entering His creation — of God refusing to wait for us to come to Him and instead, demeaning Himself to come to us — then the story that best illustrates it is the Parable of the
Prodigal Son. And that’s why it’s my all-time favorite Christmas story, better than anything Charles Schultz or Dr. Seuss have ever told.

As far as parables go, the title is misleading. Somewhere along the way, it got named after the son who leaves his family, squanders his money, and returns home a failed wreck of a man. But I wonder if maybe the story isn’t so much about the son as it is about the father. When the son left home, requesting his inheritance in advance, what he was symbolically doing was telling his dad to drop dead. He humiliated his father. The son’s actions would have stunned Jesus’ listeners, and they wouldn’t have been surprised had the family immediately disowned the boy and moved on as if he never existed.

But that’s not what happened. Consider the father’s response when the son returned. “But while he was still a long way off, his father saw him and was filled with compassion for him; he ran to his son, threw his arms around him and kissed him” (Luke 15:20).

I love the detail that the father saw the son “while he was still a long way off.” He hadn’t written the kid off as dead, as would have been expected. Nope, he was actually waiting for him to return. He was looking for him. And when he finally saw the prodigal, the dad leapt out of his rocking chair, stumbled down the porch steps and tore off down the road like a crazy person. The father took action. He went running toward the son who had so humiliated him. He didn’t care what it looked like, or what anyone else thought. He only cared about his child.

The father, of course — the crazy guy laughing and weeping and kicking up dust as he sprints down the road — is God.

Return & Redemption
Occasionally, due to speaking engagements or writing assignments, I travel solo, leaving my wife and kids at home. I love to travel, but being away from my family is hard. In fact, the best part of these trips is always the return home, because I know one thing: my kids will be at the airport to greet me. When I leave the secured part of the terminal, I always stop and get ready, because what comes next is one of my favorite things in the world. My kids will see me from way down the concourse. Their faces will light up. They’ll start running. And within seconds, I’ll be smothered by a flying, screaming, two-child, four-armed hug. It’ll be all I can do to drop my carry-on, kneel down to their level, spread my arms and try not to fall backward to the floor. And I love it. There’s no better way to return home.

The uninhibited joy of my kids’ arms-wide-open airport sprint is no different than the father’s actions in this parable. That’s what God does in the incarnation. By coming to Earth in the person of Jesus, God doesn’t wait for us to approach Him. He comes to us. He puts on flesh and blood, and in doing so, He redeems what it means to be human. He wraps all of Creation in his hug, restoring us to fellowship with Him. Through the example of His love, He restores us to fellowship with each other.

That’s the story of Christmas, and it doesn’t involve animated beagles or stop-motion reindeer or quippy vampire slayers. It’s a story about a father, and a fallen child, and how the long road between them vanishes thanks to the sprinting sandals of grace … disguised as a tiny baby in a manger.

* FOOTNOTE 1 — If you’re too young to know about Flannelgraph, read this excellent John Fischer article.)

* FOOTNOTE 2 — Quick definition: Incarnation is the theological term describing how the Creator of the world stooped to enter into His world as one of His creations. In the incarnation, the divine nature unites — perfectly, mysteriously — with human nature. See John 1:1-18 and Philippians 2:6-11.

* FOOTNOTE 3 — Seriously, am I the only one whose mind automatically conjures up the old jingle for Carnation Instant Breakfast, the powdered chocolate drink? (“You’re gonna love it in an instant!”) Please tell me I’m not alone in this.