How Jesus Responded to Someone Caught in Sexual Sin

In Matthew 5 and Matthew 19 Jesus made his thoughts on sexual morality clear, reaffirming the Old Testament view that adultery was a sin and out of line with God’s plan. So, how did Jesus respond when actually confronted with someone caught in sexual sin?

Jesus went to the Mount of Olives. At dawn he appeared again in the temple courts, where all the people gathered around him, and he sat down to teach them. The teachers of the law and the Pharisees brought in a woman caught in adultery. John 8:1-3

What’s significant here? Jesus had already spoken on adultery (Matthew 5 and 19). Perhaps some of these religious leaders were present then and wanted to use his own words against him. Jesus has already made his position on sexual morality known. So what happens when he actually interacts with someone who was “caught in the act”?

By the way, two random things I’ve always wondered: how did the religious leaders catch her in adultery? Were there Pharisees hiding behind bushes? That’s not creepy! Secondly, where’s the guy? Doesn’t it take two to tango? Anyways, here’s what Jesus did:

They made her stand before the group  and said to Jesus, “Teacher, this woman was caught in the act of adultery.  In the Law Moses commanded us to stone such women. Now what do you say?”  They were using this question as a trap, in order to have a basis for accusing him.

But Jesus bent down and started to write on the ground with his finger.  When they kept on questioning him, he straightened up and said to them, “Let any one of you who is without sin be the first to throw a stone at her.”  Again he stooped down and wrote on the ground.

At this, those who heard began to go away one at a time, the older ones first, until only Jesus was left, with the woman still standing there. Jesus straightened up and asked her, “Woman, where are they? Has no one condemned you?”

The Pharisees wanted Jesus to either condone her actions, which would have branded him a heretic, or they wanted him to condemn her to death by the Mosaic Law, which by the way was outlawed by the Romans and would have gotten him in trouble with the Romans. They presented him with a false dichotomy, and instead of going with one of the two options he was presented with, he chose option three. When the world gives you two options, choose option three.

One of the reasons that Jesus shamed the religious leaders here is because in their rush to defend truth and declare what’s right and what the Old Testament Law says, do you know who got lost in all of it? The woman caught in adultery! They didn’t have any regard for her! Jesus didn’t condone her actions nor did he condemn her. In the end, he showed compassion and he cared for her, and he called her to leave her life of sin. When the world gives you two options, choose option three. 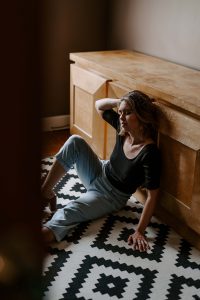