The Missing Ingredient in Most of Our Preaching Today

Not all sermons are created equal. What separates the good messages from the transformational ones? It’s not word selection, personal charisma, or even the depth of the theological truth being communicated. It’s something most preachers and teachers think nothing about. We see it as the tail end of the Sermon on the Mount, Jesus’ most famous message. What I want to focus on today is not what Jesus said but on what people said about what Jesus said.

“But everyone who hears these words of mine and does not put them into practice is like a foolish man who built his house on sand. The rain came down, the streams rose, and the winds blew and beat against that house, and it fell with a great crash.”

When Jesus had finished saying these things, the crowds were amazed at his teaching, because he taught as one who had authority, and not as their teachers of the law. Matthew 7:26-29

Authority. That’s the key word that has fascinated me for years, almost like a secret key to unlock Jesus’ effectiveness as a communicator.

It wasn’t his amazing stories, although they were good.

It wasn’t his logic, because much of his teaching didn’t make sense at first.

It wasn’t his sophistication or education, because he spoke simply and was uneducated by modern standards.

It was his authority.

What does authority mean? It’s a really good translation, so, in the spirit of Jesus, let me give you a picture of what authority is. If you graduate from college with tens of thousands of dollars in student loan debt, that is something you will be paying off for years to come. Now, as a preacher I could stand up in the pulpit that all of your loans were paid off. Go and pay no more! The only problem is, I don’t have the authority to declare that. If the president of the bank that holds your loan calls and says the same thing, that’s different. They have the authority to do that.

Just as important as the fact that Jesus taught with authority was the fact of who he was contrasted against: the Teachers of the Law. Teachers of the Law were scribes whose job it was to faithfully copy and reproduce the Jewish Scriptures, what we know of as the Old Testament today. Since they spent hours and hours every day copying the Old Testament Law, they were considered the experts in the Law. They were the college professors, the seminary professors, the theologians. They were highly respected and their advice and interpretation of Jewish Scripture shaped society.

Yes, Jesus had authority because he was God. Obviously. But he was also 100% man. What can we learn about teaching and preaching with authority today? I believe that’s the missing ingredient. 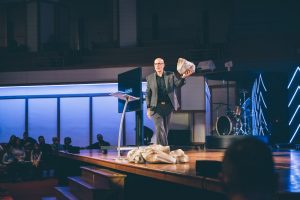