Give back and help others experience the freedom you now have

In Luke 17 we see a picture of what life should look like on the other side of freedom, and unfortunately what it ends up looking like for many of us:

Now on his way to Jerusalem, Jesus traveled along the border between Samaria and Galilee. As he was going into a village, ten men who had leprosy met him. They stood at a distance and called out in a loud voice, “Jesus, Master, have pity on us!”  When he saw them, he said, “Go, show yourselves to the priests.” And as they went, they were cleansed. One of them, when he saw he was healed, came back, praising God in a loud voice. He threw himself at Jesus’ feet and thanked him—and he was a Samaritan. Jesus asked, “Were not all ten cleansed? Where are the other nine? Has no one returned to give praise to God except this foreigner?” Then he said to him, “Rise and go; your faith has made you well.” Luke 17:11-19

Jesus healed ten men of leprosy, a damaging skin disease that would have caused not only pain but social isolation. But of the ten healed men, only one came back to give thanks. All ten were healed, but nine of the men were still so consumed with themselves that they gave no thought to thanking or giving back to others. It was only one man, who was not just healed but free, who showed his freedom by coming back and giving thanks to Jesus. Addiction and bondage causes us to become extremely self-focused and self-centered as we battle with our demons. A sure sign of freedom is that we can now take the focus off of ourselves and begin to give back to others. 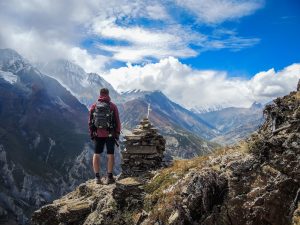 What's a Sign That I'm Truly Walking in Freedom?
archives most recent
More from Beliefnet and our partners
previous posts