A Shift in Perspective Changes Everything

On a clear moonlit night you can walk outside, hold your thumb up to the moon and block it out of sight. Does that mean your thumb is physically bigger than the moon? Not even close. It just means from your perspective something small (thumb) has become bigger than something large (moon).

In Numbers 13, twelve men saw the exact same thing. Tasked with going in and spying out the land of Canaan, they all saw the same cities, the same fruit of the land, the same obstacles, the same opportunities. And yet ten men advocated a negative report (Numbers 13:26-33) while two men pushed hard to take the land God had promised them (Numbers 14:6-9). The only difference? Their perspective. The ten chose to focus on the obstacles in front of them:

“’We can’t attack those people; they are stronger than we are.’” And they spread among the Israelites a bad report about the land they had explored. They said, ‘The land we explored devours those living in it. All the people we saw there are of great size'” (Numbers 13:31-32).

Joshua and Caleb, the two who advocated that the Israelites move forward, saw the exact same obstacles, but chose to focus on God rather than the challenges in front of them:

“The land we passed through and explored is exceedingly good. If the Lord is pleased with us, he will lead us into that land, a land flowing with milk and honey, and will give it to us” (Numbers 14:7-8).

Like a thumb, we can focus on our problems so much that they seemingly grow before our eyes and blot out the moon. Or we can step back and recognize that as big as our problems are, God is bigger. Joshua and Caleb didn’t try and deny the obstacles in front of them, they just made sure to keep those obstacles in their proper perspective.

Whether it’s a financial difficulty, a relationship on the rocks, a lingering health issue or an addiction that never seems to stop, don’t lose perspective. As big as your obstacles are, God is always bigger.

QUESTION: What obstacle in front of you has caused you to lose perspective? Where do you need to remind yourself that God is bigger? 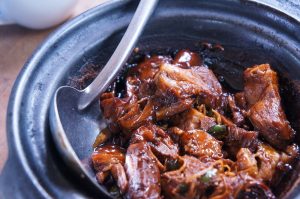