President Joe Biden addressed the “political extremism” that inspired the U.S. Capitol riot and called for collective strength during these turbulent times in his remarks during the National Prayer Breakfast, the Associated Press reports.

Biden said that faith is the prescription for the “dark, dark times” our nation is suffering through during the coronavirus pandemic and the economic fallout that has accompanied it.

“Now, I have attended many of these prayer breakfasts over the years with a nation at war and struggle and strife, a nation of peace and prosperity, a nation though always in prayer. What we know this time is different,” Biden said during the National Prayer Breakfast on Thursday. “For so many in our nation, this is a dark, dark time. So, where do we turn? Faith.”

He listed off events of the past year, including the pandemic death toll, severe weather, high unemployment, and long lines at food banks, Politico reports.

Biden took the opportunity to talk about his vision of faith as a force of good. As the nation’s second Catholic president, Biden has been vocal about his faith. We should expect his faith to be on full display during his time in office.

The event was entirely virtual this year, a result of the pandemic. Biden and other speakers made their remarks through taped remarks.

The National Prayer Breakfast has been a tradition for sitting presidents dating back to President Dwight Eisenhower’s first appearance at the event in 1953. While the breakfast is supposed to be a unifying event, calling for political combatants to set aside their differences for one morning, the event has not been without controversy.

Sen. Christ Coons (D-Del.), who is also a friend and close ally of the president, said the breakfast “recognizes the teachings of Jesus but is not limited to Christianity.” He also said that it is meant to be “an inclusive and positive event” though it has taken on a more partisan tone in recent years, Politico reports.

The breakfast sparked controversy in the past as former President Donald Trump was known to use the breakfast to slam his political opponents and question their faith.

The event has also drawn pushback from civil rights and gay activists dating back to the Obama administration, with a great deal of opposition focusing on the Fellowship Foundation. This conservative faith-based organization has long supported the breakfast.

Biden’s message signals a return to tradition, as many believed the breakfast had shifted away from tradition during Trump’s presidency.

You can listen to Biden’s remarks in the video below. 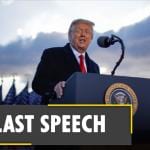 The transportation secretary is encouraging evangelical Christians who are concerned about getting the COVID-19 vaccine to take into consideration that it might be “part of God’s plan.” Buttigieg, who is Christian, was asked by “State of the Union” host Jake Tapper about the high number of white evangelicals who refuse to get a COVID-19 vaccine. […]

The belief that Donald Trump was a Messiah ran rampant during his time in office. While many Evangelicals supported Trump because they believed he shared the same politics and values, some supported him because they thought he was a Messiah. They saw Trump as infallible and became his disciples. Pastor Franz Gerber was worried that […]