‘Trump is Using Us’: Christian Republican Group Warns People Not to Vote For Trump in 2020 Election

A group of Republicans is urging Christians and Republicans to not re-elect Trump in the 2020 presidential election.

According to the Pew Research Center survey in July, White evangelical approval of Trump has slipped, but 8 in 10 say they would still vote for him.

The recent release ad, entitled “Trump is Using Us,” features six Republican voters who talk about how Trump uses and manipulates Christians.

In the minute-long video posted on the Republican Voters Against Trump YouTube channel, the group explains that the president doesn’t reflect Christianity or values based on his words and actions.

One major highlight of the video was the comments Trump made following a violent white nationalist rally in Charlottesville, Virginia, in 2017. At the time, he said there were “very fine people on both sides” when talking about protesters and rally-goers.

They also brought up Trump retweeting a man shouting “white power!” on his Twitter page.

Another highlight was Trump’s notorious remarks on grabbing a woman’s genitalia in leaked footage from 2005.

Paul specifically talks about how law enforcement “bludgeoned and gassed peaceful protestors” for Trump’s “ridiculous photo op” holding a Bible in front of the church.

“The moment that he held up that Bible, he revealed this president is using us,” Pat said.

He also added that “Christians have to resist being used to justify things that Jesus would never justify.”

The Republican Christians also highlight biblical principles throughout the ad. One voter named Cheves shares that he was taught the importance of loving our neighbor as ourselves. Another voter named Paul quotes 1 Corinthians 13:4-6, a memorable passage on love.

“Love is patient, love is kind, love does not boast,” Paul says, while Trump is shown saying, “I am the chosen one!”

“Love does not delight in evil but rejoices with the truth,” he said.

“What’s going on now is wrong, and as a Republican, as a Christian, we simply cannot allow this man to be re-elected,” a man named Shawn says as the video concludes.

Watch the full ad in the video below. 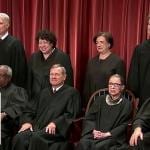