Only 25 Percent of Americans See Trump as a ‘Man of Faith,’ According to New Poll

About a quarter of Americans say they see Trump as a “man of faith,” according to a new Politico-Morning Consult poll.

Fifty-five percent of respondents said they somewhat or strongly disagree that the president is a “man of faith.”

This was about the picture of the president with a Bible in front of St, John’s Episcopal Church in Washington, D.C.

The bishop overseeing the church criticized Trump for appearing for photos without praying or addressing the racial issues at the heart of nationwide protests.

The forceful dispersal began before the Washington, D.C., curfew had begun. Other religious leaders have also condemned these actions.

Following the move, the president also faced considerable criticism and lost support from many Christians.

He has also struggled with declining approval ratings due to his response to the nationwide protests following the jilling of George Floyd and his Coronavirus pandemic response.

In a recent interview with former White House press secretary Sean Spicer, Trump was asked about his faith and how much it has grown since taking office. His response drew criticism and questions about the way he views religion.

“So I think maybe I have, from the standpoint that I see so much that I can do. I’ve done so much for religion,” Trump said. 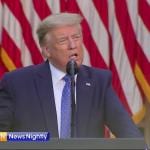