How can Christians defend themselves against today’s random violence?

So, a crazed gunman opens fire and you’re caught in the middle. How can you survive? Heroes come in all sorts of packages. And they wield all sorts of defensive weapons.

Such as guns and Jesus. Sometimes both at the same time.

When a disturbed young man marched into a Georgia grade school with an AK-47 and about 500 rounds of ammo, the quick thinking and warmth of school secretary Antoinette Tuff helped ensure his surrender before anyone got hurt. She says she prayed the entire time, shared her faith with the disturbed young man, then encouraged him to do the right thing.

At one point, the highly agitated gunman asked Tuff to call a local TV station. According to WSB-TV in Atlanta, the gunman demanded the station send a TV crew to film him killing police.

“Then the gunman began to break down,” reports the Los Angeles Times.  And as he began to waver in the school’s office, Tuff started counseling — and consoling — the young man, who began lamenting that whether he lived or died did not matter.

“No, it does matter!” she told him, as a 911 dispatcher recorded her pleas. “I can let them know you have not tried to harm me or do anything with me or anything – but that doesn’t make any difference, you didn’t hit anybody. … Don’t feel bad, baby. My husband just left me after 33 years… Yes you do! I’m sitting here with you and talking to you about it! I got a son that’s multiple-disabled. We’re not going to hate you, baby, it’s a good thing you’re giving up.”

As he wavered, “It’s going to be all right, sweetheart,” she counseled him. “I just want you to know I love you and I’m proud of you,” Tuff told him with 911 listening in on the phone. “That’s a good thing that you’re giving up, and don’t worry about it. We all go through something in life. I tried to commit suicide last year after my husband left me, but look at me now, I’m still working, and everything is going to be OK.”

“Tuff told a local news station that she was able to stay calm because of what she had been learning from her pastor at church,” reported Nicola Menzie for the Christian Post.

“My pastor, he just started this teaching on anchoring, and how you anchor yourself in the Lord,” Tuff told the Post. “I just sat there and started praying. I just remembered the teaching and how he taught us how to consult people when they’re bereaving and all that.”

“I realized at that time that it was bigger than me,” she added. “He was really a hurting young man so I just started praying for him. I just started talking to him and allowing him to know some of my life stories and what was going on with me, and that it was going to be OK and he could just give himself up.”

When asked for her thoughts on why Hill was so compliant, Tuff told a local news station, “I have no idea. That was nobody but God. I can’t even put that on myself. I was praying hard.”

God’s intervention was also cited for preventing a bloodbath in Washington, D.C.
Leo Johnson, the operations manager at the Family Research Council’s headquarters in Washington, D.C, confronted a deranged young man who rushed toward him brandishing a gun, intending to commit mass murder. The would-be terrorist told the FBI he selected the FRC as a target after finding it listed as an “anti-gay” group on the website of the Southern Poverty Law Center. After reading seeing FRC’s headquarters on the SPLC’s “hate map” on its website, he had determined to kill as many FRC employees as possible.

However, Johnson stopped him, taking a bullet in the arm as he wrestled away the attacker’s gun – preventing him from harming anyone else.

“I would give credit to my faith for everything that has happened,” Johnson said, admitting that after he took the gun, he considering turning it on the struggling would-be terrorist, but “it was God who spoke to me and told me to not take his life, to spare his life. And, you know, I’ve never regretted that decision.”

The attacker has since been sentenced to 25 years in prison for the attack.

God’s protection was cited again in Colorado Springs when a church volunteer subdued a gunman who had already attacked another church and a Christian training center.

When the gunman rushed into the New Life Church, he started shooting churchgoers. Church volunteer Jeanne Assam ran to the sound of gunshots and says “God guided me and protected me.”

She told the media how the gunman entered the east entrance of the church firing his gun. “There was chaos,” Assam said, as parishioners ran away. “I saw him coming through the doors” and took cover, Assam said. “I came out of cover and identified myself and engaged him and took him down.” She shot him dead.

Assam had several years of experience in law enforcement and is licensed to carry a weapon. “I give credit to God,” Assam said. “God was with me. I didn’t think for a minute to run away.” Fellow churchgoer, and Vietnam veteran Larry Bourbonnais told the Denver Post  it was the bravest thing he’d ever seen.

Bourbonnais was among those shot by the gunman. “She just started walking toward the gunman firing the whole way,” said Bourbonnais, who was shot in the arm. “She was just yelling ‘Surrender,’ walking and shooting the whole time.”

The gunman had already killed four people at another church and then at a missionary training school. New Life Church Pastor Brady Boyd told the media that Assam “probably saved a hundred lives.”

However, at least 81 worshipers and 140 were injured died at All Saints Church in Pakistan two suicide bombers detonated their explosive devices. Around the globe, such attacks are increasingly frequent – particularly in countries where firearms are banned.

No one was armed at the church except for two Muslim security guards who were killed. Also, the suicide bombers gave no warning before detonating the blasts that killed themselves and the Christian worshipers.

“In this time of tragedy, let us pray not only for healing and comfort, but also that God will continue using it to provide peace and turn sympathies toward Pakistani believers who have faced much persecution in the past,” said K. P. Yohannan, founder and director of Gospel for Asia.

Churchgoers there were completing worship and about to share a covered-dish dinner when the bombs exploded. Among the dead were 34 women and seven children. A splinter group of the Pakistani Taliban claimed responsibility, saying they “will continue to strike wherever we will find an opportunity against non-Muslims.”

In a country where only 3 percent are Christians, many Muslims expressed sympathy and outrage at the attack on peaceful worshippers. Government officials condemned the attack. “Such cruel acts of terrorism reflect the brutality and inhumane mindset of the terrorists,” said Pakistani Prime Minister Nawaz Sharif.

Meanwhile, an armed former Royal Marine emerged as a hero when a similar group targeted a shopping mall in Nairobi, Kenya, according to the British newspaper The Daily Mail. The armed, retired Marine was credited with saving up to 100 lives.

Armed with his personal handgun, he moved in and out of the mall many times, each time leading new victims to safety, according to reporter Onan Coca. “The morning of the shooting, the mall massacre hero was sitting in a mall coffee shop enjoying a beverage with some friends. When the shooting began, he escorted his friends from the building, but the brave acts he will be remembered for happened next. The man returned into the besieged building at least a dozen times rescuing somewhere around 100 people. Each reentry into the mall-turned-combat-zone was more dangerous than the previous, as more and more people were led out of harm’s way.”

However, the ex-Marine asked the news media not to release his name for security reasons – particularly since terrorists could target him and his family.

“He risked himself for about 100 people,” writes Coca. “How many families did he protect from heartbreak by his selflessness? Mothers and fathers who will see their children again. Sisters and brothers who won’t know the pain of losing their sibling to mindless violence. There are children who won’t have to experience life as orphans because this hero took a stand.”

In Oregon, two died when a gunman opened fire at the crowded Clackamas Town Center Mall near Portland. Again prayer was cited for saving customer, Jocelyn Lay, who tells of quietly hiding from the shooter and asking God for help.

She says the Almighty sent her make-up clerk Allan Fonseca, works at the Lancome counter at Macy’s department store. He calmly helped her navigate through the store to reach an exit. Then he returned to the danger zone to help guide others scrambling to safety, reported the Daily Mail.

‘The gunfire just kept going off,’ Lay said on Good Morning America. Lay said she started praying and then Fonseca “took me by the hand and took me down the escalator and out to safety.”

Prayer has also been cited when a gunman leveled his pistol at the customers of a Fort Worth, Texas, McDonald’s restaurant — and pulled the trigger repeatedly without result, according to the the  Star-Telegram.

When the gun would not fire, he ran outside and fired a shot in the air. The gun discharged.

He returned back inside and took aim at the terrified customers and employees. Once again, the gun would not fire.

After watching the restaurant’s surveillance video, “I’ve never seen anything like that before,” said police Sgt. Joe Loughman. “It must not have been their time to go.” He said police are baffled.

However, the young gunman’s mother, however, told the newspaper she believes the gun misfired – repeatedly – because “we were praying.”

She recounted how her son had called her, clearly disturbed both mentally and emotionally. When she hung up, she told the newspaper, “I told God to keep Jestin.”

When he went to the McDonald’s, apparently intending to kill strangers and his himself, his gun would not fire — at least five times.

His mother was praying. 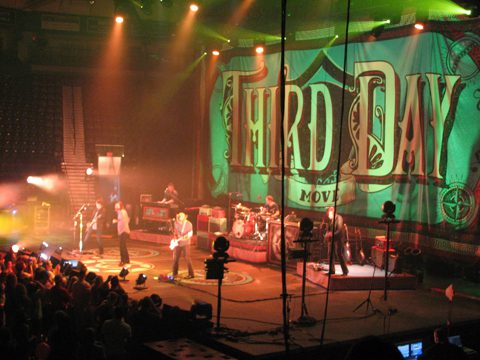 Does Sunday Morning Church Really Need All This Glitter, Showmanship and Gimmickry?
archives most recent
More from Beliefnet and our partners
previous posts