What if you could vote “None of the Above?”

“What if we add another ‘party’ to the ballot: ‘None of the Above’ alongside ‘Republican’ and ‘Democrat’?” asks political observer Deb Fitz. 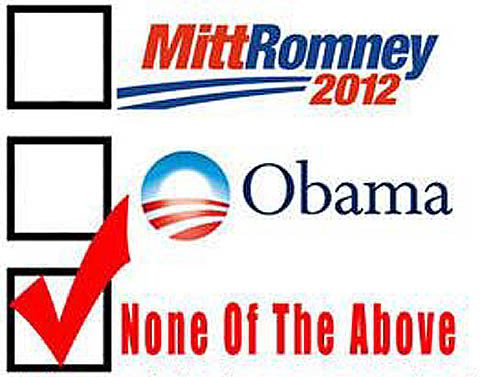 Indeed, could it work? It’s already the law in Nevada, Spain and Ukraine. It was tried in Russia – targeting abuse by power-brokers. For decades the Communist Party had controlled the ballot – making sure only their candidates appeared. For decades, they proclaimed to the world that the Soviet people had free elections – but voters could either approve the Party choice or leave their ballot blank.

In Iran’s most recent elections, the mullahs who run the country disqualified any candidate who threatened their reign. Thus, ballot choices included no reformers, no dissidents, no moderates.

When democracy came to Russia after the fall of the Soviet Union, voters targeted the party’s central control. They demanded the right to reject official candidates. Steven Lee Myers of the New York Times called the “None of the Above” ballot choice “the ultimate protest vote.”

Writing from the city of Ulyanovsk, Myers reported: “Here in this faded industrial city on the Volga, ‘Against All’ won. Twice. In the December parliamentary election, voters of District 181 threw out not only the incumbent, a retired general, but the rest of the pack as well.

In the subsequent election, “Against all,” won again.

“In December, two other parliamentary districts, in Sverdlovsk and St. Petersburg, voted ‘against all,’” reported Myers. “Ulyanovsk refused again to send anyone to Parliament. ‘Against all’ also won five of six runoffs for the regional legislature.

“Ulyanovsk’s obstinacy has embarrassed local election officials,” noted Myers, “not to mention the spurned candidates, many of them prominent public figures. They included Vadim I. Orlov, the incumbent; the former Communist governor of the region; the chief doctor of the city children’s hospital; and a handful of businessmen.”

Could “None of the Above” work here? 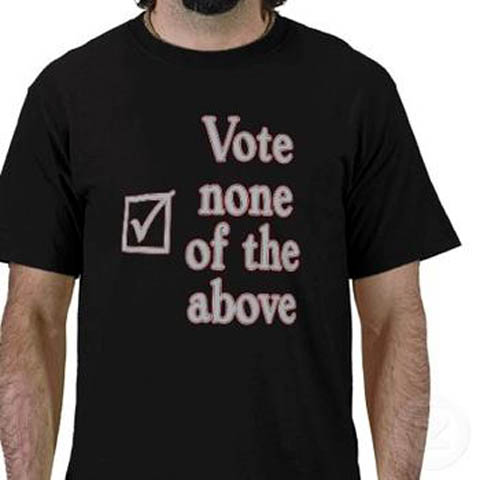 “I’ve been watching what is going on in Washington and I’m really disappointed,” writes Fritz. “I was so hoping that ‘change’ meant a real commitment to ethics and morality. I hoped that The People’s agenda might finally have some meaning. But it’s business as usual in Washington — back room deals making in exchange for votes or backing. With big business and big unions calling the shots, the will of The People hasn’t got a chance.”

If “None of the Above” were on the ballot alongside “Mitt Romney” and “Barack Obama,” writes Fritz,“at last we would have an effective way to show our dissatisfaction.

“While polls show that only eight percent of Americans approve of the way Congress is doing its job, our politicians don’t seem to be getting the message. With my proposed constitutional amendment they would … loud and clear!”

None of the above — the idea comes before state legislators from time. It is predictably opposed by both the Republican and Democratic parties.

When it has gone to a vote in a number of states, including California, it has been vehemently opposed by the establishment and voted down. In November 2002, Oregon’s proposed Measure 21 would have required “None of the Above” to be an option when voting for state and local judges. It lost 526,450 to 668,256.

When Nevada voters passed it, a last-minute change neutered the option’s effect – it’s not binding. Although “None of the Above” appears on Nevada ballots, it cannot trigger a new election. The candidate with the most votes takes office even if “None of the above” wins.

In 1996, the Wall Street Journal endorsed the concept: “Oregon Republicans wish there was something they could do about Representative Wes Cooley, a freshman who is in hot water over allegations he misled people about his military record and the date of his marriage.

“Three of his staffers have resigned, and it looks as if a Democrat could win the seat this fall. Cooley won the GOP primary last month because he was unopposed, but he received only 23,000 votes while 31,000 voters wrote in someone else or kept their ballots blank.

“It’s as if the second-place finisher at this year’s Olympic Games was awarded the gold medal. It’s time to consider giving voters a binding ‘None of the Above’ line on ballots.”

The Journal noted how useful the option would be “in many cases where an elected official lands in trouble but has no effective opposition. Representative Mel Reynolds of Illinois was indicted on sex charges in mid-1994, but he won reelection with 98 percent of the vote because he had no opponent.

“None of the Above,” wrote the Journal’s editorial staff, would also be useful when both major parties offer unacceptable candidates, such as the 1991 Louisiana governor’s race between convicted felon Edwin Edwards and Ku Klux Klan leader David Duke.

Iran’s mullahs hate the idea. So do America’s political kingmakers. Russia’s power-brokers got it appealed in 2006.

Even so, “a ‘None of the Above’ line on the ballot,” writes Ralph Nader, “is a proper and long overdue expansion of voting choice at a time when citizens are staying away from the polls in droves because of their disgust, distrust, despair and disillusionment.

“Presently, from forty to eighty percent of eligible voters, depending on the election, stay home and are labeled apathetic.  Refusing to participate, they do not count and have little impact on who gets on to future ballots and how they behave when elected.

“‘None of the Above’”makes voters who wish to register a ‘no-confidence’ vote, who wish to withhold their consent, count,” writes Nader.

The idea has been endorsed by The Nation magazine and the Boston Globe – but the last serious attempt to put “None of the Above” up for a vote was almost a decade ago.

It would appear that voter disgust with the upcoming presidential election could resurrect the notion. Mention either Obama or Romney and you get an ear full of disappointment, disillusionment, ambivalence and hostility. Voters seem driven only by negativity – their unhappiness, not their excitement.

Evangelicals are certainly wringing their hands. In 2008, some 17 million of them stayed home. They’ve been stung by third-party alternatives – supporting Ross Perot just put Bill Clinton and Monica Lewinsky into the Oval Office.

They yearn for another option. The Republican primary season demonstrated that – with the agonizing search for “anybody but Romney.” Rick Scott, Jon Huntsman, Rick Santorum, Mitch Daniels, Ron Paul, Newt Gingrich and even Sarah Palin had a moment in the limelight – with Gingrich drawing nearly twice as much evangelical support as the former Massachusetts governor.

Romney’s Mormonism worries fundamentalist evangelicals who are further disillusioned by his inconsistent record on such moral issues as abortion and same-gender marriage. His stiff public demeanor evokes Cal Coolidge.

Some cynics speculate that neither party hierarchy really wants to win in 2012. Having the other party in the White House has a spectacular effect on fund-raising. The other party that wins will reap the blame for what seems to be an inevitable economic train wreck.

So, let the other party’s candidate become the new Herbert Hoover. 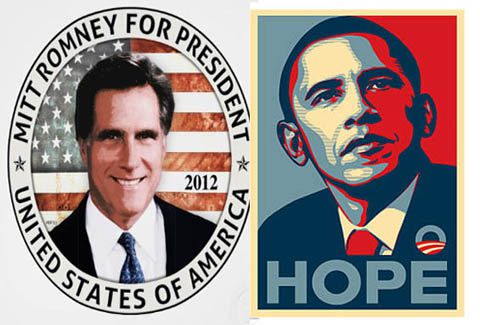 In the Federalist Papers, “James Madison voiced his hope that American elections would feature candidates ‘who possess the most attractive merit, and the most diffusive and established characters,’” notes John J. Pitney, Jr. , an assistant professor of government at Claremont McKenna College.

“When he wrote those words, government was simple, elected offices were few, and the roster of potential candidates was rich with such greats as George Washington, John Adams and George Mason. Because of the growth of government at all levels, the total number of elected offices has since risen to 497,000 – but not all 497,000 elections give voters a choice among candidates of George Washington’s caliber. When voters elect members of Congress, state legislators or town councilors, they must often choose from the unworthy.”

“In the final analysis,” concludes Nader, “politicians understand only one language – voter rejection. ‘None of the Above’ allows voters to send a message that they want change.

“Whenever I mention political reforms to strengthen our democracy before audiences, the one that receives the most enthusiastic applause is ‘None of the Above.’

“It is time to let the voters decide.” 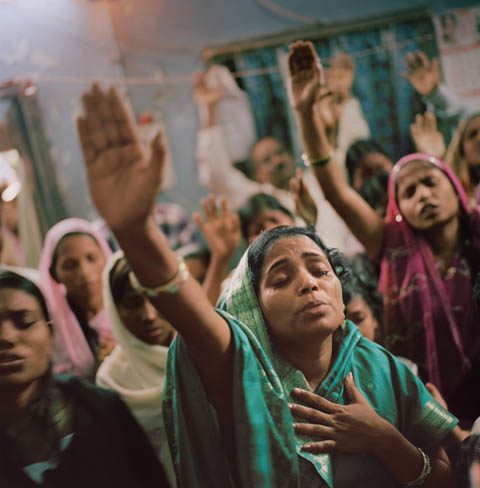 India's Christians: What would Gandhi do?
archives most recent
More from Beliefnet and our partners
previous posts