Is there anything to all the buzz on Twitter about Obama’s weekend executive order?

Has President Barack Obama quietly given himself dictatorial powers over the weekend — new authority to nationalize much of the country’s national resources? To draft citizens into a non-military corps?

That’s the buzz – particularly on Twitter over an Executive Order that Obama signed Friday afternoon.

“WillF” tweeted: “ While many of my friends worry about a right-wing takeover of the US, did Obama just sign an Executive Order allowing dictatorship?”

“D_Seaman” commented: “REMINDER: an Executive Order from FDR allowed Japanese Americans to be detained without trial during WW II. Exec Orders can be powerful.”

Is all the alarm justified? What is going on?

“Twitter is buzzing with controversy over the new Executive Order signed by President Barack Obama on Friday, March 16, 2012,” writes blogger Kyle Merriam. “The order was posted on WhiteHouse.gov, but many people heard on Twitter, responding with outrage that Obama may have signed an order that allows a dictatorship in the event of an emergency or war.

“Check it out. It’s a jawdropper. It calls for a draft, but not just a draft. A civilian draft, of ‘persons of outstanding experience or ability’ without compensation. If they think they need you, they can compel you to work for the government for nothing.

“It also allows for drafting civilians. If they have need of your skills, they can compel you to work for no compensation.”

Is that what the executive order really says?

In an article headlined “Conservatives Are Freaking Out Over An Executive Order That May Give Obama Complete Control Over The Economy,” Business Insider‘s Michael Brendan Dougherty quips that “no two news sources can agree on what it means.

On the left side of the aisle, the Huffington Post’s Edwin Black says the president’s action puts the United States on a “war footing.”

“So what is in this document?” asks Dougherty. “It’s based in part on the Defense Production Act of 1950, which mobilized America for the Korean War.

“Basically that law granted the Executive branch of government broad authority in the economy: to compel businesses to sign contracts to produce goods for the national defense, to set wage and price controls, especially on raw materials, and to even requisition property that might be useful for national defense.

“The Act,” writes Dougherty, “has been reauthorized and passed through Congress many times, most recently in 2008 by President Bush, who had previously re-authorized it in 2003. President Clinton did the same in 1994.”

However, this time, it has caused enormous concern:

“President Barack Obama issued an Executive Order on March 16 giving the White House absolute control over all the country’s natural resources in case of a natural disaster or during a time of war,” writes Joe Wolverton for the right-of-center New American magazine. “In the order, the National Defense Resources Preparedness Order, the President granted to himself the authority to approve the dispensing of all domestic energy, production, transportation, food, and water supplies as he deems necessary to protect national security.”

The Executive Order “also contains a vague reference in regards to harnessing American citizens to fulfill ‘labor requirements’ for the purposes of national defense,” notes Brandon Turbeville of the website Global Research. “Not only that, but the authority claimed inside the Executive Order does not only apply to National Emergencies and times of war. It also applies in peacetime.”

Chris Kitze of the website Before It’s News, explains: “This Executive Order was posted on the WhiteHouse.gov web site on Friday, March 16, 2012, under the name National Defense Resources Preparedness. In a nutshell, it gives the president the power to take just about anything deemed necessary for ‘National Defense,’ whatever they decide that is. It’s peacetime, because as the title of the order says, it’s for ‘Preparedness.’

“Under this order the heads of these cabinet level positions; Agriculture, Energy, Health and Human Services, Transportation, Defense and Commerce can take food, livestock, fertilizer, farm equipment, all forms of energy, water resources, all forms of civil transportation (meaning any vehicles, boats, planes), and any other materials, including construction materials from wherever they are available. This is probably why the government has been visiting farms with GPS devices, so they know exactly where to go when they turn this one on.”

Kenneth Schortgen Jr., writing in the Finance Examiner newspaper, writes, “Executive Orders created for national defense and national preparedness are not new in American history, but in each instance they brought about a Constitutional crisis that nearly led standing Presidents to hold dictatorial power over the citizenry.”

Calm down, writes Ed Morrissey at the website HotAir:

“We’re getting a lot of e-mail this weekend about an executive order issued on Friday afternoon by President Obama titled ‘National Defense Resources Preparedness.’ While the timing of the Executive Order is curious — why send it out on a Friday afternoon when an administration is usually trying to sneak bad news past the media? — the general impact of it is negligible. This Executive Order simply updates another Executive Order (12919) that had been in place since June 1994, and amended several times since.

“Section 101. Purpose. This order delegates authorities and addresses national defense resource policies and programs under the Defense Production Act of 1950, as amended (the ‘Act’).

“Sounds dramatic, doesn’t it?” asks Morrissey. “ This actually matches the language in Executive Order 12919, however, even the part about ‘in peacetime.’ Note what this Executive Order specifically orders: identify, assess, be prepared, improve, foster cooperation.

“ None of these items claim authority to seize private property and place them at the personal disposal of Obama.”

The order says the President can invoke the powers of this order to “meet national defense requirements” in “the full spectrum of emergencies.”

Presidents have issued similar orders in the name of national defense. For example, during the Civil War, President Abraham Lincoln suspended habeas corpus and the rights to an impartial trial as protected by the Sixth Amendment.

During World War I, President Woodrow Wilson, frustrated with Congress’s reluctance to grant him power over natural resources, invoked an executive order to assume absolute and unilateral authority over the same range of resources.

So, yes, it sounds pretty alarming.

But the White House says it’s just clarifying the status quo – so Americans can be ready in case of emergency. 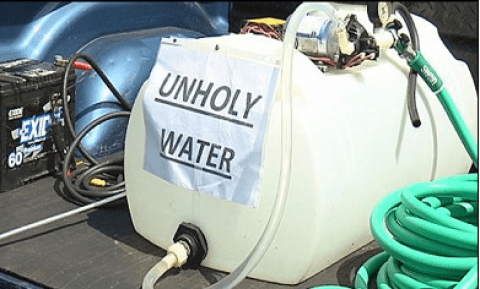 The Blaze: Atheists use "unholy water" to scrub away olive oil used to bless highway -- because they‘re not going to tolerate 'bigotry'
archives most recent
More from Beliefnet and our partners
previous posts