Gawking European tourists are paying to stand in long lines so they can enjoy a unique New York City experience — the legendary Gospel music of Harlem’s black churches.

Having to turn away crowds of international visitors are a number of evangelical neighborhood churches famous for their joyous choirs, sermons delivered in dramatic traditional cadence and unabashed congregations with an exuberant style of worshiping Jesus.

“Take a guided tour through Harlem’s charming tree-lined streets and historic districts,” reads another, “before attending a worship service in a local church, where you will experience the soul-stirring power of Gospel music.”

That’s right, foreign tourists in New York City are paying $55 and $65 to go to church.

“Out of respect for congregants, we ask you not to wear shorts, tank tops and flip flops,” cautions one website, which offers tour packages in English, French, German, Italian and Spanish. “Cameras and camcorders are not allowed inside the church.”

And the on-line reviews are glowing: The service was beautiful, very uplifting and “everything that you would expect a Gospel service to be,” wrote a British tourist who rated the experience the full five stars, noting that her 16-year-old son even commented that if all churches were like that “more people would go.” Thinking her family would be bored, she said she was more than a little surprised when they joined the congregation in singing and clapping.

“WOW!!” writes Lina N. about the All New York Tours experience: “from the second we walked into the church I was moved to tears! The choir was simply magnificent and engaging.”

“This was, without a doubt, one of the BEST things, if not THE best thing, I have ever experienced in my life,” wrote Jasmine B. on the Viator visitors’ feedback site: “Whether you are religious or not, or even slightly interested in Gospel, this will just blow your mind. I was mesmerized!!! Can’t wait to go back to the States; I will be spending more time in Harlem. It was just awesome. Everyone must experience this; it’s a great moment.” 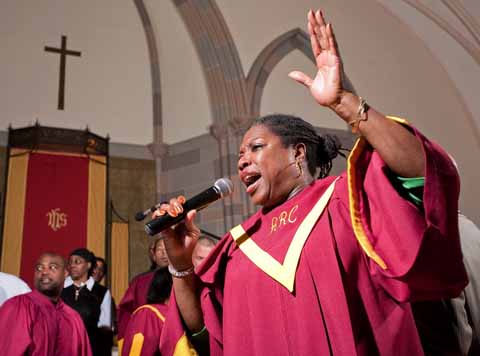 Writing in a personal blog, a British Columbia university student who didn’t quite understand that evangelical churches don’t celebrate mass wrote: “The churches in Harlem take Sunday mass very seriously, so plan ahead if you want to attend a service. I have been to two gospel services and have been absolutely blown away both times. Call ahead to ensure they welcome visitors, dress up, bring money for the collection, and be prepared to clap your hands! Believe me, it will be everything you imagine a Gospel service would be.

“If you’re hesitant to attend a service alone, there are a lot of tours that will take you, although they might not be able to get you into some of the more exclusive churches. My favourite church so far is definitely the Abyssinian Baptist Church on Odell Clark Place.”

On a recent Sunday morning, more than 200 tourists outnumbered the nearby Mother African Methodist Episcopal Church’s congregation 5-1. Pastor Gregory Robeson Smith said he refuses to work with tour operators – and thus forfeits the percentage that some churches collect.

Smith “doesn’t even like to use the word ‘tourist,’” he told a reporter from the British newspaper the Daily Mail, “preferring instead to call them part of his ‘international congregation.’  And he won’t turn anyone away.”

“’I refuse to commercialize the church worship experience,’ he said. “‘You don’t charge people to experience the Lord, to come and pray. I think that’s unconscionable.’”

A recent visitor to the church, Celeste Lejeune, 16, from Paris, didn’t know anything about the congregation’s history. Mother AME Church is the oldest black church in New York, was a stop on the Underground Railroad, and its congregants have included Frederick Douglass and Harriet Tubman.

“I like to just hear voices of people who live in Harlem, and see the atmosphere,” she said. “We don’t have music like this in France.”

The church is “one of many Harlem churches that have become tourist attractions for visitors from all over the world who want to listen to soulful Gospel music at a black church service,” notes the Daily Mail.

But there is a down side: “With a record number of tourists descending upon New York City last year, the crowds of foreigners are becoming a source of irritation among faithful churchgoers. To preserve the sanctity of the service, pastors struggle to enforce strict rules of conduct. But the reality is that these visitors are often filling church pews that would otherwise remain empty.

Congregation member Carlos Smith-Ramsey says he dislikes being filmed by gawking tourists. “I understand that you’re visiting and you want to have a memory of it,” he told the Daily Mail. “But when we ask you to stop and you continue to do so after the fact, that’s disrespectful.”

However, he appreciates the visitors often filling pews as well as the collection plates.

“Our building is in need of repair,” church member Paul Henderson said after the service. “We need assistance. They’re helping to sustain us.”

“The Gospel tour industry has exploded since it was born in the early 1980s,” reports the Daily Mail. “On a busy summer Sunday, Harlem Spirituals, one of the oldest and largest tour operators, might run 15 full buses, said Erika Elisabeth, a company vice president.”

And the glowing reviews continue to pour in: “This fantastic event was the highlight of our New York holiday,” writes Craig N. from Australia. “I am not a religious person, but I could have been easily influenced to join the faith after this experience. We were very welcomed by the church community and they delivered a service that was so inspiring that it almost bought me to tears. Congratulations on a well planned & delivered event.”

“Had a wonderful time on the Harlem Spirituals tour, when my folks came over from Italy in August,” writes another. “My parents didn’t know what to expect, and neither did my kids, since I typically would have taken them all to other places. But I’m glad we went. Great and moving service, great singers, great tour guide. My parents are still talking about it!!! ”

The Abyssinian Baptist Church is perhaps the most popular tourist magnet. There visitors are often turned away because the pews are too full. It has a two-page “Tourist Policy,” which explains that gawkers are banned from the 9 a.m. service, as well as the 11 a.m. service on certain special days — and are required to wait outside a designated “Tourist Entry Point,” unless they have made group reservations allowed for school groups, church groups, and family reunions.

Sad that the crowds have necessitated such rules, longtime congregation member Dabney Montgomery, 88, a Tuskegee Airman during World War II and a civil rights activist, told the Daily Mail that he believes tourists walk away richer for the experience.

“In listening to the Gospel, they get something out that they didn’t expect,” he said. “The word of God.” 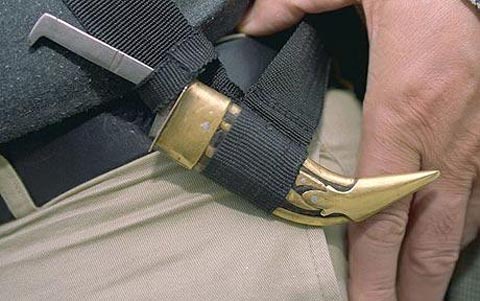