U.S. military chaplains asked to perform weddings will not be forced to violate their consciences nor the doctrines of their faith — and may decline to officiate nuptials for homosexual couples.

The ruling came in a memo from Clifford Stanley, undersecretary of defense for personnel and readiness.

The same memo says chaplains are permitted to perform homosexual marriage ceremonies on military bases in the six states where such are allowed: Connecticut, Iowa, Massachusetts, New Hampshire, New York and Vermont — will not be forced to do so. Forty-one states have either laws or constitutional amendments prohibiting same-sex marriage.

The decision “threatens to reignite the contentious debate in Congress over gays and lesbians in the military,” notes Charles Hoskinson in Politico. Federal law does not recognize same-sex marriages.

In fact, a number of Congressmen vowed to overturn the Pentagon ruling.

The memo notes that “a chaplain is not required to participate or officiate in a private ceremony if doing so would be in variance with the tenets of his or her religious or personal beliefs,” writes staff writer Andrew Tilghman for the Army Times, a civilian-owned newspaper. “In addition, a chaplain’s participation “does not constitute an endorsement of the ceremony” by the Defense Department.

In a separate memo also released Friday, Pentagon lawyer Jeh Johnson directed base commanders to make decisions about the use of Defense Department “real property and facilities, private functions for religious and other ceremonies … made on a sexual-orientation-neutral basis, provided such use is not prohibited by applicable state and local laws.”

The move was hailed by homosexual advocacy groups and denounced by conservative groups such as the Concerned Women for America.

“The Pentagon has clearly overstepped its bounds,” said Penny Nance, chief executive officer for the Virginia-based group. “As part of the federal government, the Department of Defense must abide by federal law including the Defense of Marriage Act, which permits marriage only between one man and one woman.”

Congressional lawmakers who opposed the repeal of “don’t ask, don’t tell” forced the Navy to reverse itself in April when Navy officials recommended allowing chaplains to perform same-sex marriages. On Friday, lawmakers called the Pentagon’s decision illegal and vowed to block it.

“The Department of Defense has decided to put the White House’s liberal agenda ahead of following the law,” said Rep. Todd Akin (R-Mo.). “The Defense of Marriage Act makes it clear that for the purposes of the federal government, marriage is defined as between one man and one woman. The use of federal property or federal employees to perform gay marriage ceremonies is a clear contravention of the law.”

The constitutionality of the 1996 law is in doubt after several court rulings against it, and the Obama administration announced in February that it would no longer defend DOMA against challenges. Lawyers for the House of Representatives have stepped in to defend the law, and the issue is eventually expected to reach the Supreme Court.

The Pentagon memo sidestepped extending military benefits to same-sex spouses, stating a chaplain’s participation in a same-sex marriage “does not constitute an endorsement of the ceremony” by the Department of Defense. 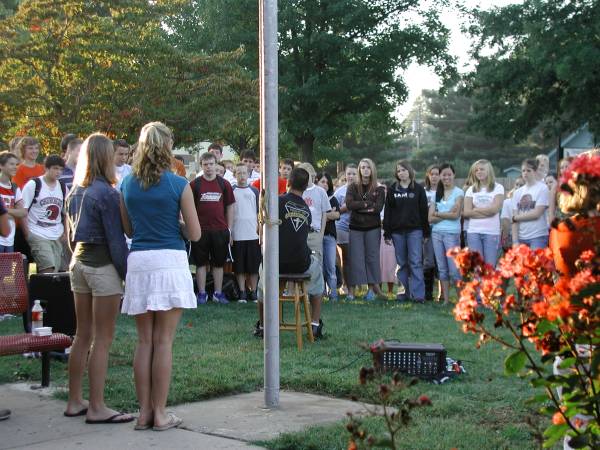 Over 2 million kids show up early, pray for their schools at "See You at the Pole"
archives most recent
More from Beliefnet and our partners
previous posts