Is Obama the Antichrist? Apparently not

President Barack Obama passed a key test Monday night in case anybody is worried that he might be the Antichrist.

Speaking at a campaign fundraiser at the House of Blues in Los Angeles, Obama was interrupted by a man identified as David Serrano who repeatedly yelled that “Jesus is God.” As Serrano was being physically removed by Secret Service agents, he accused Obama of being the Antichrist.

That figure in Christian “last days” theology is believed to be a leader who, toward the end of time, will be an adversary of good while resembling Christ. The Antichrist will provide for the needs of the people but deny them eternal salvation. He is named in the New Testament books 1 John and 2 John and described by the Apostle Paul in 2 Thessalonians.

John’s account advises that the Antichrist will deny that Jesus is the Christ and will “not confess Jesus.” In I Corinthians 12:3, Paul writes: “Wherefore I give you to understand, that no man speaking by the Spirit of God calleth Jesus accursed: and that no man can say that Jesus is the Lord, but by the Holy Ghost.”

As Serrano was being dragged away, President Obama gave the man his full attention, nodding as he watched the scene. Obama then attempted to pick up where he had left off.

“First of all,” Obama began, “I agree, Jesus Christ is the Lord. I believe in that.”

And with those words, it would appear that Obama just eliminated himself from possible candidates for Antichrist.

Serrano was not arrested. Local officials said he is known to them and has made similar appearances at other government meetings. 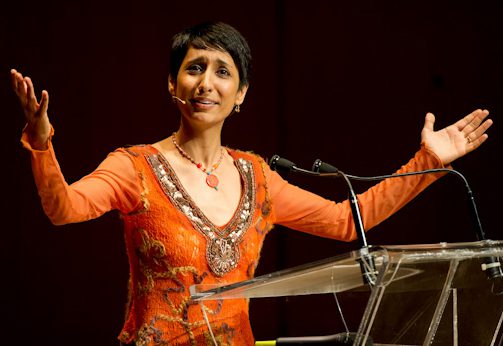 Bestselling lesbian Muslim author says her mission is to spark discussion, debate
archives most recent
More from Beliefnet and our partners
previous posts