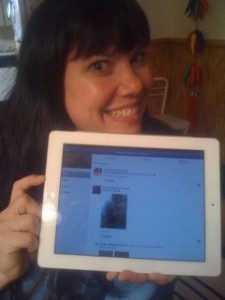 And so the big story–the headline–is that a 40-year-old homeschool mom unexpectedly lost her young and fit husband when he died of a massive heart attack next to her in bed. Even now–23 days later–I’m still not believing that story. It just seems so unreal.

But within the big story–under that headline–lies a multitude of little stories: all good and all fascinating.  I can’t just let them slip away without recording them. They deserve to be shared because they’re all about sharing. And sharing is what this life is about.

I knew this before Joe died, but now I know that I know it: we are all connected. What one does for one person, affects yet another person and on and on and on in a never-ending domino parade.  Sometimes we get to watch those dominoes fall and we get to say “Wow!”…other times it happens behind our back. I’m going to tell you some of the recent “wow” stories which have unfolded before my eyes.

I’ll start with the biggest (so far!) and most recent…let’s call it “Tithing Upside Down.”

My part of the story:
A few years ago I was on my friend’s facebook page and I couldn’t stop laughing over the antics of her friend, Jason. I added him as a friend and Jason became one of my favorite facebook buddies…always ready with a crazy response to whatever I posted. When Joe died, Jason sent me daily text messages about how he and his girlfriend, Marlena, were praying for me. I was reduced to tears when he told me how he had sang “for Joe” in church that morning. Please note that I have never met Jason in person.

Also a few years ago, I met Julie on-line by reading her blog. She’s a homeschool mom of three with a houseful of animals so, of course, we hit it off. She’s married to her soul mate and we talked often about how the relationship she had with Marshall was much like the relationship I had with Joe. Please note that I have never met Julie in person (but she’s a heart-sister just the same).

Last Tuesday I was feeling lonely and sad and angry and I just couldn’t shake the negative energy. I said aloud “God, I need you to tell me what to do to get past this.” God responded so clearly, “Send Jason $250.” It was so easy to agree to that, and, as soon as I did, this feeling of joy and relief washed over me. The anger and sadness vanished. I wrote out the check, put it on the table so I would remember to send it the next day and went on with my day: happily.

Wednesday morning I mailed the check before taking my daughter to the zoo for her birthday. When I came home that afternoon I found a package waiting for me on the porch. It was from Julie. It was a brand new iPad…and a check for $2,000. Yeah. Really. She couldn’t have known that only a month ago I had written “an iPad for Joe” in my wish book.

Julie’s part of the story:
Julie was on vacation when Joe passed away but when she returned and read my newsfeed, her heart was broken for me. She texted me her love and support. She and Marshall talked about how they could help us and came to the “iPad and money” conclusion separately…and then confirmed each other. They were planning on sending $1000 but then went to church where the pastor spoke on the widow’s mite and how the best kind of giving was the sacrificial kind. When they left the church, Marshall turned to Julie and said, “Send your friend $2000.” An important part of this story is this: although receiving a new iPad (Squeeee!!!!) and $2000 (Woot!) was AMAZING….this time of connection, relationship and love while Marshall, Julie and their children chose a gift for me and sent it on, was phenomenal for them.  Truly…the blessing is in the giving.

Jason’s part of the story:
Meanwhile, Jason and his girlfriend were experiencing some unexpected financial woes. They had no idea how they would be able to pay the mortgage or feed the children…much less buy Christmas gifts. In the middle of their worry, though, they held on to some hope. Jason said to Marlena, “We’ve watched how God has provided whatever Kirsten needs when she needs it. That can happen for us, too.” And isn’t it interesting that, after saying such a thing, a check would arrive…well…from Kirsten? lol. A side note to this part of the story: that week Jason had baked pumpkin bread for the girlfriend’s ex and spent 13 hours cleaning out a friend’s rent house….

Wow! What an amazing domino parade! And so it goes.