According to the Bible, God used words to create our world. There was nothing. And then God spoke and there was something. How truly cool is that? And when God spoke humans into being, the humans were made in God’s image. How truly cool is that? Part of that “God’s Image” is that we have the capacity for creativity. Now–stop right there–I know your mind just drifted to someone writing a little poem or sprinkling glitter on a piece of paper :). I love the arts as much as the next person (duh!) but the word “creativity” encompasses much more than the arts. Creativity means: “the ability to transcend traditional ideas, rules, patterns, relationships, or the like, and to create meaningful new ideas, forms, methods, interpretations.” (Dictionary.com)

Six years ago I let go of old ideas, forms, methods, interpretations of my life and experienced an amazing shift in my thought process.  Instead of allowing my days to just drift from one to the next–turning whichever corner they would like and delivering experiences to me on the arm of happenstance–I chose to consciously create what I wanted in my life.  There are many ways to do this. This creative way of living could simply be stating out loud, “I want this” and then heading consciously toward that goal. It could mean getting rid of relationships that keep one from her goal or developing new relationships that help one toward her goal. It can mean not giving time or attention or thought to the bad things in one’s life because the things we focus on do indeed grow larger. There are many ways to consciously create one’s life, but one of my favorites is to simply to write down my wishes. 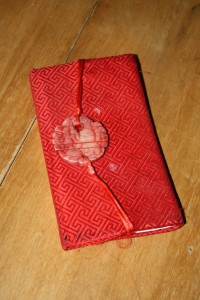 I keep my wishes scribbled in a worn fabric-covered diary my niece brought me from China. Each page starts with the same words, “I am so happy and thankful for….” and a list follows. All of the  items/experiences listed–page after page–are things I didn’t have at the time so I was writing about the hopeful future in the present tense, pretending that they were already in existence.  Heb 11:1 (KJV):  “Now faith is the substance of things hoped for, the evidence of things not seen”. When I look back now over the pages I can’t help but laugh because almost every single thing–even the most outlandish ones–are checked off.  From a trip to Disney World to a producing garden–my wishes *do* come true. It seems like magic but it’s not. It’s creativity. I have a thought. I focus on that thought and expect that thought to happen. It happens. It really is as easy as that.

A look at my pages: 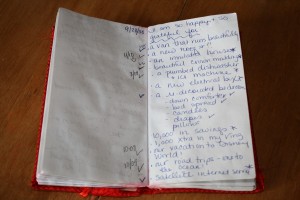 July 15, 2010 I wrote “I am so thankful and grateful for a weekend in Seattle with Beth, Keith and Charlene”. Two weeks later my father, not knowing I had written this, said, “I need to visit my brother in Seattle. I have enough frequent flier miles for us both to go, would you like to travel with me?” We left on August 8.

Some of my wishes come true immediately and some I am still waiting on three years later; I continue to re-write those wishes each time (“…to have our house paid for in full!”).  A few times I’ve gone back and crossed something off (“I’m so happy and thankful to own a miniature horse”) because I changed my mind!

Yes, you may feel a little silly playing pretend the first time you write in your Wish Book, but I promise you it is so worth it! Won’t you give it a try? And let me know the first time you get to put a big check next to something. Don’t forget to put the date at the top of the page and date it when the wish comes true.  Who would have thought writing in a notebook could be so much fun?