Illinois just joined ranks with other states who are recycling old roofing shingles to pave roads. The old shingles are ground up and added to the asphalt mix. Missouri has already done such a thing and estimates it saved $20 million dollars in 2009. Last year one million tons of shingles were used in such a way but that is only 10% of the available shingles that could have been used. Not only is this idea saving the states money but researchers claim this new recipe makes better roads. For the full story, click here.

I think this is brilliant!

Here on our little farm we love to recycle. We congratulate ourselves for every bit of plastic we don’t add to the landfills, and we like exercising creativity and brain power by coming up with new ways to re-use. My husband is especially innovative in this area. Once he used part of a broken lawn mower to make a teeter totter for the kids 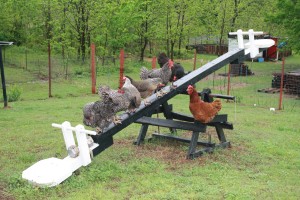 Our most ambitious recycle project was the chicken coop. My husband’s goal was to build it entirely of recycled materials and show our children it could be done.  He lives the example. We didn’t gather the materials first. We started the project and prayed for the materials to follow ;).(There is a life lesson hidden in that sentence.)

We had some cement blocks so those went down first.  We had taken ugly, sturdy, metal-barred doors off the house when we remodeled and those went down on the cement blocks. Our friends had recently built a house in town and allowed us to go through their dumpster for wood. Joe examined each strangely shaped piece of wood and he and our son pieced them together–much like a jig saw puzzle–to make the walls.  They even hammered out used nails!

Very soon, though, we came to a dilemma: the roof.

There is a story that goes with the roof.  Joe and I had saved $500 to go to a conference in a nearby city. (Yes, we had $500 but we still were using recycled materials for the coop. Recycling is not just about saving money.) Joe’s mother had agreed to stay with the children while we were away but she would need the family van available to take them places. Our only other transportation choice was Joe’s rusty 1986 Ford F150 truck. I was pretty embarrassed about climbing up in to that old farm truck in my professional clothing, but driving up to the fancy Double Tree hotel and searching  for a large enough spot among all the shiny little cars was torture for me. Driving home in that old truck, though, we found rolled roofing on the side of the highway! I was so thankful for a means to transport our answered prayer!