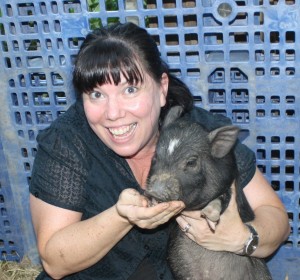 Meet Lola the Pig. And you might as well say “hi” to the happy lady holding her. It’s pretty obvious that lady is in her “Happy Place”.  Lola’s story starts a long time ago when that lady was just a little girl.

When I was a little girl my favorite place on earth–the spot that beat out Disney Land and Sea World–was Uncle Russy and Aunt Amy’s house in Nowhere, South Dakota. They lived on a pig farm in a little two-story farm house. There were many wonderful things about visiting my Aunt and Uncle: Aunt Amy’s frozen treats stocked in bulk and Uncle Russy singing “You are My Sunshine” while playing the accordion. But, of course, the best thing on the farm was the pigs. When the adults were talking around the kitchen table, I would sneak out the door–pulling on someone’s too-big mud boots on the way out–climb in to a pig pen and look for the runt. No, the runt did *not* want to be caught and cuddled but I did it anyway. And those moments were bliss.

Here we are years and years later and my friend’s pot bellied pig, Lola, needs a home. I told my husband, “I know what I want for my birthday this year and it won’t cost you a penny.” He laughed and said, “Oh, those are the most expensive kind of gifts!” He was right. He spent three labor-intensive, back-breaking days making a fabulous pen for Lola followed by a two-hour van ride with a smelly pig!

She was a little tentative the first night….exploring her new home but unsure about the people hanging out in the pen with her. The second day she decided maybe we were okay since we did have food in our hands. The third night she was climbing up our fronts trying to get to those fluffy taste-sensations we carried in a baggie: POPCORN!

I have a feeling Lola’s pig pen is going to become one of my most favorite Happy Places….. 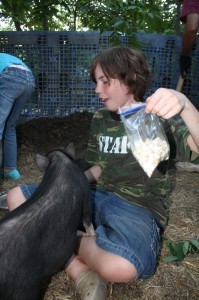