What’s that I hear? 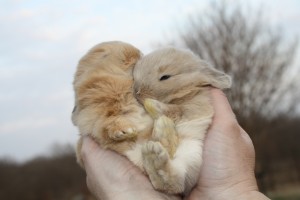 Last night I was curled up in bed reading and I heard the little voice, “Go check on the bunnies”. I don’t usually spend time on the bunnies in the evening. They are in an enclosed area and I feed and water them in the mornings.

I decided to be on the safe side, though, and went to look. I knew one of my does was pregnant but I thought she wasn’t due for another week or so…and she’s had other litters and done well with them.

I was shocked when I found her four baby bunnies strewn about the bunny yard–cold but alive. Baby bunnies are hairless and cannot live outside of a warm nest for longer than an hour or so.

In my experience hypothermia is the biggest baby bunny killer.

I brought them up to the house and through a long process of bunnies in a plastic baggie, immersed in warm water…bunnies on a heating pad…bunnies under a heat lamp…bunnies held under our warm breaths of prayer–the bunnies warmed up and Mother Rabbit even fed them.

The experience reminded me of another time about eight years ago.

I was hugely pregnant–weeks away from giving birth–and I was sitting on a friends’ couch next to my husband visiting, telling stories, and laughing.  Our four-year-old son and one-year-old daughter were playing in the other room with our friends’ five-year-old little boy.  In my head I argued with that voice: “It’s hard to get off this couch! I’m HUGE! Besides, my husband could check on the kids.” (I later found out he heard the voice, too.)

I didn’t obey the voice.

That night on the way home I ask my son if he had a good time playing with his friend. He looked a little puzzled, then described a scene that he was–fortunately— too young to understand.  Apparently his five-year-old friend had been told about sexual molestation — and suggested to my four-year-old that they try what had been described to him. My little boy simply said “no” (huge sigh of relief!).

No, nothing happened.   But I will forever have branded in my mind and heart the things that can happen when I don’t obey the voice.

This morning–as I place my hand in a bunny nest and feel warm life–I thank the Voice and pray that I will always obey.

Bounty Begins!
archives most recent
More from Beliefnet and our partners
previous posts