A Rise in Hate Crimes: Imam Killed Outside Mosque

As a member of the Ahmadiyya Muslim Community, we are saddened by the unfortunate and untimely deaths of the victims of  recent hate crimes. We pray for them and their families and hope that justice is served. Over the past few weeks we have seen an increase in hate crimes across the country.

A man continually harassed his neighbors because they were Arab and this ultimately led to the death of an innocent person because of his ethnicity. An Imam and his assistant were going to the mosque to worship the same God of Jesus and Moses, yet they were gunned down in broad daylight outside of the mosque. The Bible says “love thy neighbor” yet we continue to witness acts of hatred to our neighbors and fellow Americans. As these incidences increase, we must get to the root cause of this senseless violence. The language and rhetoric used by some politicians recently has been increasingly divisive. These are the people that we put our trust in to lead our great nation, so instead of calling for bans on individuals of entire religions and labeling whole groups, those in positions of influence should call for peace and understanding amongst the various sections of our American society.

When these events occur, it should bring us together to focus on change and it begins with the leaders of our country to fight for justice. Talking heads on the media and those that give air time to such hateful rhetoric further fuel the environment of bigotry in this nation. The grossly disproportionate coverage of Muslims in a negative light paints a one dimensional view in the minds of many Americans that is leading to their radicalization and subsequently a spike in hate crimes and discrimination against Muslims. The media should focus on groups that are promoting the pure and true teachings of Islam. The Ahmadiyya Muslim Community has launched the True Islam campaign to combat this false narrative that is portrayed by extremists groups as well as Islamaphobes. The campaign introduces eleven points that are used by extremist and how their false ideologies go strictly against the teachings of Islam. The Ahmadiyya Muslim Community is also holding its sixth annual Muslims for Life blood drive campaign to honor 9/11 victims. Over the past five years, our Mosques have been open and we have come together with other places of worship to host blood drives throughout the nation to honor those that lost their lives on 9/11. It is our duty as Americans to come together regardless of our religious or racial differences and unite to bring peace to the world.

After the Imam was killed outside of the mosque, people throughout the United States said “I’ll walk with you.” Americans offered to walk with Muslims to the mosque in a show of solidarity. This is the America that I know and I ask all Americans to “walk with us” but stay for a while and come inside the Mosque and learn about True Islam, help us save lives by giving blood and let’s work together to eradicate this hate that is running rampant in our society. 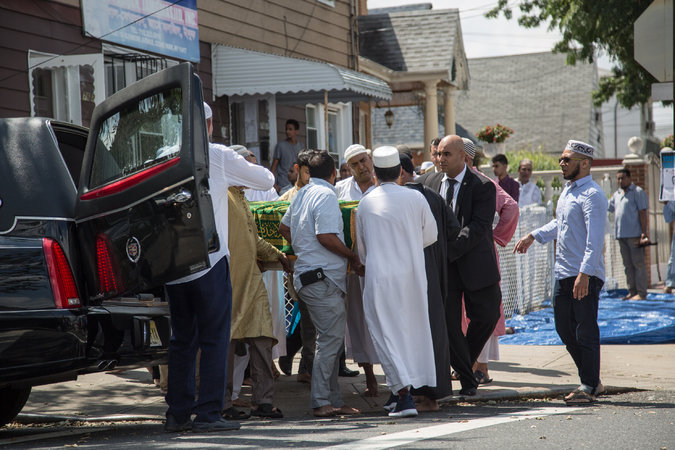 The funeral prayers for the two slain men drew hundreds of mourners. Credit Christopher Lee for The New York Times