Islam Was Not Spread by the Sword 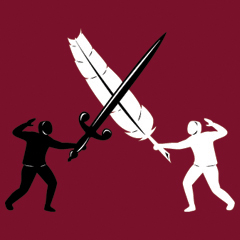 The opponents of Islam often state that it was spread by the sword. Any unbiased person who critically analyzes history will come to know this is not true. Moreover this assertion is definitely against the commandment in the Holy Quran which states that there shall be no compulsion in matters of faith (2:256). Some reference the early wars fought by the Prophet Muhammad and later by his companions as aggressive wars meant to force Islam on the people around them.

In the case of the wars fought by Muhammad and his followers, none of them were started without provocation. All such wars in the early history of Islam were defensive, to protect themselves from other people who were determined to eliminate them from the earth not for any reason other than the fact that they professed that God is One and there is none worthy of worship save Him. Faced with the danger of being attacked not for any other reason but their faith, they had no option but to defend themselves with the same weapons that the enemies were using in their atrocities. They had exercised this fundamental right of self-defense.

For 13 years Muhammad preached the new faith he has received from God in a peaceful way and with great patience even though they faced severe persecution from their people. Eventually Muhammad decided to migrate to Medina: a town about 280 miles from his birth place of Mecca. This is a clear indication of a person who wanted to live in peace to practice his faith.  If he wanted to spread his faith by coercion he could stay in Mecca and fight back to force his people to accept his faith, but this is against the message God gave him (2:256). After this migration when the idol worshipers of Mecca decided to pursue him in an attempt to destroy him and his followers, God gave them the permission for the first time to defend themselves (22:40). They were told to defend themselves because they have done no wrong other than saying “Our Lord is Allah”.

Even though Muhammad and his followers were given  permission to defend themselves, God admonishes them to incline to peace whenever the opponents desire so. God says in the Holy Quran 8:62 “And if they incline towards peace, incline thou also towards it, and put your trust in Allah” Muhammad and his followers obeyed this commandment and restrained from any fighting except for self defense. Numerous times had the Prophet Muhammad admonished his followers and warned them not to commit excesses even when defending their right to worship. Also God reminded Muhammad many times in the Quran that the acceptance of the faith which he is preaching is not in his hands but in the hands of God Himself and that his job is just the plain delivery of the message (24:55)

History shows that what is forced on people is soon rejected. Had Islam been forced down the throat of people, there would have been no Islam today. The sword can win territories but not hearts. If Islam had been spread by the sword as alleged then what about its spreading now? In America every year thousands of people willingly, without any coercion accept Islam despite the negative image of Islam portrayed by the extremist and highlighted by the media. Islam was never, and will never be, spread by the sword because such a teaching goes against the words of God in theQuran and the practice of Muhammad.

As the Ahmadiyya Muslim Community who believes in the Promised Messiah, Mirza Ghulam Ahmad, who was prophesied by Muhammad to appear in this age to correct the wrong teachings attributed to Islam, we spread the peaceful message of Islam to the world. Ahmad, about a century ago, admonished Muslims that Jihad of the sword which was permitted to the early Muslims to defend themselves is over because now the opponents of Islam are not using weapons to stop its spread, they are using other means and Muslims should reciprocate  with the same.

In conclusion, any person who has read the Quran in the right context and analyzed the wars fought by Muhammad and the earlier Muslims without any prejudice will come to the  realization that Islam was not and will never be spread by the sword because its truth can easily be established by sound intellectual arguments, heavenly signs or other reliable testimony and needs no coercion for its propagation.