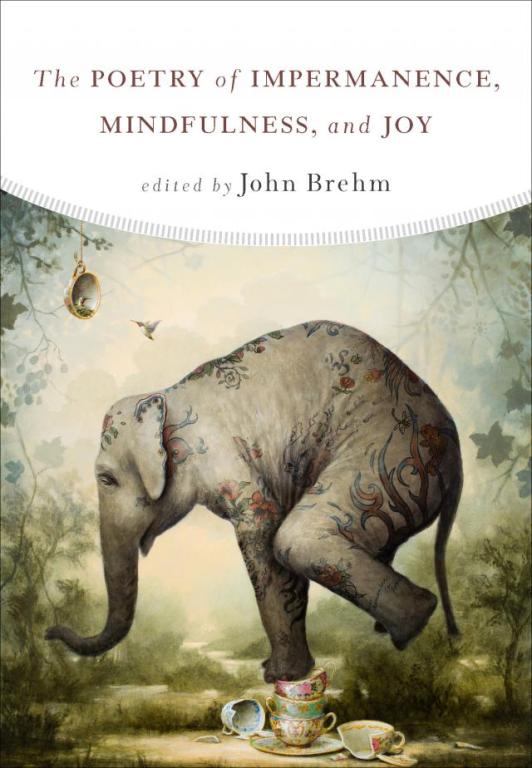 Good things come in small packages especially when it is The Poetry of Impermanence, Mindfulness, and Joy edited by the poet John Brehm and published by Wisdom. Wisdom has a habit of producing beautifully crafted books, packed with, well, wisdom! By way of disclosure, two of these books are mine (108 Metaphors for Mindfulness and Mindfulness A to Z).

There are certain poems and poets that make the mindfulness circuit Brehm has intentionally left these out exposing us to an entirely new world of poetry. I was fascinated to find that, while I was familiar with many of the poets (e.g., Symborzka, Neruda, Basho), I was not using any of his poems in my mindfulness teaching and, therefore, each of these over 125 poems is discovery.

You won’t find T. S. Eliot, Mary Oliver, Rilke, or Rumi. Also missing, Seamus Heaney, Galway Kinnell, and Derek Walcott. These poets are well represented elsewhere and this collection will acquaint you with the ancient Chinese poets, Japanese Haiku masters, and a range of 19th and 20th century poets, including a cadre from Poland. You will also find Ellen Bass:

If You Knew
What if you knew you’d be the last
to touch someone?
If you were taking tickets, for example,
at the theater, tearing them,
giving back the ragged stubs,
you might take care to touch that palm,
brush your fingertips
along the life line’s crease.
When a man pulls his wheeled suitcase
too slowly through the airport, when
the car in front of me doesn’t signal,
when the clerk at the pharmacy
won’t say Thank you, I don’t remember
they’re going to die.
A friend told me she’d been with her aunt.
They’d just had lunch and the waiter,
a young gay man with plum black eyes,
joked as he served the coffee, kissed
her aunt’s powdered cheek when they left.
Then they walked half a block and her aunt
dropped dead on the sidewalk.
How close does the dragon’s spume
have to come? How wide does the crack
in heaven have to split?
What would people look like
if we could see them as they are,
soaked in honey, stung and swollen,
reckless, pinned against time?

Even though he’s not represented in this work, elsewhere Galway Kinnell said, “Poetry is somebody standing up, so to speak, and saying, with as little concealment as possible, what it is for him or her to be on earth at this moment.” There is much of this kind of truth telling in these poems.

Someone said, I’m not sure if it was it was also Galway Kinnell, that “poetry is the process of going so far inside yourself that it becomes universal.” Such depth of self-discovery can be found in the poems in this collection. Brehm collects poets who will tell us (and not all of them Buddhist) that when we attend to impermanence with mindfulness joy results.

Given that I have been reading in the field, as it were, for almost thirty-five years, I am often left, if I am lucky, with an appreciation for the author’s voice. I am growing weary reading and writing about mindfulness. It’s been overdone. (And while I lament the tedium, I am guilty of perpetuating it; look for my next book, Timeless Truths for Modern Mindfulness, in January 2018 from Sky Horse). It’s rare, however, that I am learning something new, exciting, or expanding my horizons. This book accomplishes all this: new poems, poets, and perspectives.

The only thing that I would have like is the dates that the poems were written. The date can provide some context for the poem (although we have a range given the dates the poet lived or was born).

I especially enjoyed the biographies that appear in the back of the book. These are meticulous and concise and along with the poems constitute a poetical education—a far ranging, deep course on poetry. A singular gift in such a small format. It will take me years, perhaps, to work through all the poets highlighted in this volume, the ones I already knew about and especially the ones that I’ve been introduced to know.

Here is an instructive quote on poetry from one biography of William Stafford:

A writer is not so much someone who has something to say as he is someone who has found a process that will bring about new things he would not have thought of if he hadn’t started to say them.—William Stafford, quoted in Brehm, 2017, 243)

The essay on mindful reading appears immediately after the poems and I would suggest reading this first because it provides a frame of mind to approach the poems. Keats is quoted saying that to read poetry is to luxuriate in it. “Poetry soothes and emboldens the soul to accept mystery.”

One thing that Brehm does not suggest is to read the poems more than once, especially when the analytical mind intrudes in the process. I’ve read each of these poems at least twice, sometimes more, just getting a sense of their rhythm, language, and tone.

Every great poem has a logic that doesn’t necessarily accord with logic. That is, a rhythm, sense, and meaning that does’t have to accord with conventional reason, although sometimes it does in richly saturated way. I find that memorizing a poem grants access to this inner logic and that the more I read a poem, the deeper inside it I get until it reveals itself.

Another suggestion that Brehm makes is to read poetry aloud after doing a sound meditation that he provides. Perhaps not on the first reading but once you’ve entered into it a bit, let it speak. This will bring another dimension of the poem alive.

Here is one of the gems by Jack Gilbert:

Our heart wanders lost in the dark woods.
Our dream wrestles in the castle of doubt.
But there’s music in us. Hope is pushed down
but the angel flies up again taking us with her.
The summer mornings begin inch by inch
while we sleep, and walk with us later
as long-legged beauty through
the dirty streets. It is no surprise
that danger and suffering surround us.
What astonishes is the singing.
We know the horses are there in the dark
meadow because we can smell them,
can hear them breathing.
Our spirit persists like a man struggling
through the frozen valley
who suddenly smells flowers
and realizes the snow is melting
out of sight on top of the mountain,
knows that spring has begun.

Simone Weil said, “Attention is the rarest and purest form of generosity.” Reading The Poetry of Impermanence, Mindfulness, and Joy is a generous thing that you can do for yourself and it makes a wonderful gift.

A Workshop for Opening to Life: The Surfer and the Shrink
archives most recent
More from Beliefnet and our partners
previous posts