I’ve been writing about mindfulness for almost ten years now, practicing it for almost thirty (a few years shy of that). Despite the fact that there are too many mindfulness books in the world already, I can’t help myself–I keep writing!

My two mindfulness-focused book are now a lovely matched set–each a collection of 108 short chapters. These books are gifty in that sense that they don’t need to be read straight through. You can keep them on your night stand and dip into them as you please. 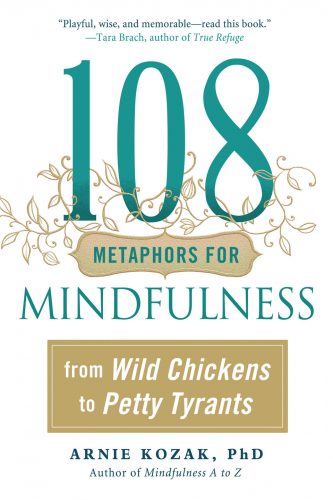 I am also pleased to announce that my first book–Wild Chickens and Petty Tyrants: 108 Metaphors for Mindfulness is being re-released under the title 108 Metaphors for Mindfulness: from Wild Chickens to Petty Tyrants. It has the same metaphors that many people have grown to love and trust in their daily mindfulness practice in a new book design (astute obersvers will notice that it is very similar to Mindfulness A to Z. Here is an excerpt from the preface that I wrote for the new edition:

Since the initial publication of 108 Metaphors for Mindfulness in 2009, I’ve come to appreciate further the Buddha’s mastery with metaphors. Indeed, Buddhist scholar Damien Keown said, “The Buddha’s skill in teaching the Dharma, demonstrated in his ability to adapt his message to the context in which it was delivered. Parables, metaphors, and similes formed an important part of his teaching rep- ertoire, skillfully tailored to suit the level of his audi- ence.” The Pali Canon, which is the written record of the Buddha’s teachings, contains over 1000 met- aphorical references addressing over 500 different concepts. 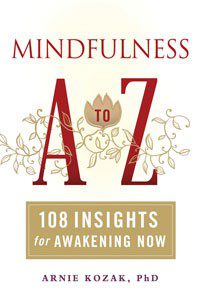 Mindfulness A to Z is something of a memoir because it contains a variety of personal stories about times that I was mindful and times that I was not. The book is organized as the title suggests as a dictionary of mindfulness terms with listings literally from a to z. You’ll find entries on acceptance, Buddha, compassion, equanimity, and so forth.

The book has been beautifully produced by Wisdom. It’s not the kind of book that you’ll read cover to cover. You can march through the entries in order or you can skip around. You’ll want to read one or two per day and sit with the wisdom and guidance that it sets forth.

It is my hope that this book through its candid revelations about my own attempts to live a mindful life can help you to live more mindfully too. Each brief chapter contains some important teaching relevant to mindfulness and grounded in the teachings of the Buddha.

Here are some samples: 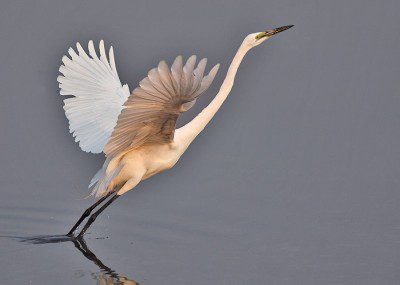 E is for Effort

Mindfulness A to Z official release is tomorrow!Here is an excerpt from “E is for Effort”

We may need to encourage ourselves gently in the direction of practice. Challenges arise. Daily life is complicated and busy; it may seem like we have no time to practice. But the effort required to be mindful in any given moment is small. After we bring our attention to what is happening now, the onrush of life works to pull us back into our story. Effort is the aggregate of many small moves, many small corrections in the direction of attending to the here and now. It is not about forcing our minds to stand still like statues. It’s about simply bringing attention back again and again. Good effort is the art of the gentle return to now.

—Arnie Kozak, Mindfulness A to Z: 108 Insights for Awakening Now

Available right now from Wisdom Publications and wherever books are sold >>

N is for Nirvana

Mindfulness A to Z official release is 7 Days Away!Here is an excerpt from “N is for Nirvana”

Nirvana is one of the most commonly misunderstood concepts in Buddhism. It literally means “blown out,” as when the flame of a candle has been extinguished. Because of its usage in popular culture, nirvana is often imagined to be a transcendent reality—an ultimate existence that is more real than our ordinary lives. It is true that nirvana is a state quite different than our normal state of experience, but the idea has been blown somewhat out of proportion in popular culture. The Buddha chose the metaphorical term “nirvana” to describe his enlightenment, not as an otherworldly transcendent experience, but as the final extinction of the fires of suffering in himself.

—Arnie Kozak, Mindfulness A to Z: 108 Insights for Awakening Now

Available right now from Wisdom Publications and wherever books are sold >>