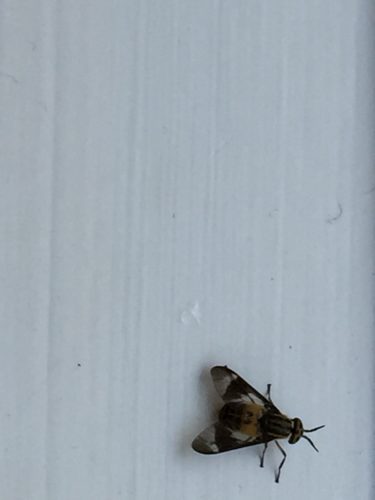 Some notion of non-harmfulness is a key feature of religious, ethical, and philosophical systems. In Buddhism, it is called ahimsa.

Summer in Northern Vermont is a battle between human and insect. The Deer Flies are especially active this time of year. If you are not familiar, deer flies are a triangle shape (very similar to a stealth bomber) and when they bite (or sting), I get a nice itchy welt. Admittedly, these welts don’t persist long yet there is a clear sense that these creatures are feeding upon me.

While I am honored to play my part in the food chain, receiving their attention is hard to do with equanimity.

To practice ahimsa would require not killing these flies before they inflict damage upon my flesh. That is, I would have to let them munch away as I walk or run through the woods. Or I could spray myself with chemicals that might deter them.

There isn’t a real threat to me. These aren’t West Nile Virus carrying mosquitos (still better to deter them than to vigilantly scan and kill them manually), so why does it feel like a battle? The answer to this questions boils down to the notion of self that we carry around.

This self is a thing (like that fly) and it needs to be protected. Thus a battle emerges between man and fly. As I mentioned already, there is no mortal threat, so the treat is to my comfort level and my ego.

The hovering buzzing frenetic action of the files triggers archaic defense strategies that served our ancestors well eons ago but is of dubious value to me now. My battle with the flies requires energy (attention resources of vigilance, trying to catch them on the back of my neck before they bite, etc) and only serves to reinforce this solid notion of self.

Then there is the issue of harming other beings. Is it possible to live one’s life without harming others? The Jains were (and are still) contemporaries of the Buddha. You might see them today wearing masks so they don’t inadvertently swallow a bug.

The great saint Mahavira took their non harmfulness ideal to its logical conclusion and starved himself to death for to eat requires harming other living things, be they plant or animal.

Centuries ago, the microscopic world was not known yet we know today that we are occupied by about a couple of pounds of microorganisms in our microbiome. It is not possible to live without killing. Where do we draw the line?

Kurt Cobain wondered if eating fish was okay since they weren’t supposed to have any feelings. That notions is coming into question now as a compelling and chilling episode of Fresh Air made clear.

In his fascinating book, The Mindful Carnivore, Tovar Ceruli an avowed vegan realized “I wasn’t eating animals, but my vegetables were.” This is the case because animals must be destroyed in the production of food, whether it is the ground hog in the garden or deer that feed on farm fields.

We tend to forgot that life is food. This is the natural way of things in the world. We are the only ones who can make choices based on ethical consciousness.

If, for example, birds and other predators didn’t eat insects and all the insects of the world’s offspring survived and reproduced, all of which survived, in a few generations the earth would be covered in several feet of insects!

This fact is not license for me to kill the deer flies. Each time I do, I perpetuate this illusory battle, that there is some one on my end to engage in that conflict.

The illusory, metaphorical nature of self is the subject of my next book project. I’m gathering a lot of field data every time I am in the woods. There are some days that awakening seems far away as I relish in the struggle. The flies can bite skin but they cannot bite “me” because that self is a fluid, unfolding, process of energy not some thing standing outside of experience.

Life presents this basic dilemma with almost every breath. Be fully present in the flow of experience or identify with this notion of self as some abstracted disembodied entity. It is only this latter notion of self that can suffer the slings and arrows of life.

What Would the Buddha Think of the Mindfulness Movement?
archives most recent
More from Beliefnet and our partners
previous posts