Mindful America: Are You Part of the Movement? 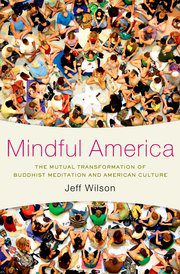 It’s a thought provoking read and the first of its kind scholarly analysis of the rise of the mindfulness movement in America. It’s well written, entertaining, and features an extended discussion of the metaphors from my first book, Wild Chickens and Petty Tyrants: 108 Metaphors for Mindfulness.

Wilson makes a compelling case to show that mindfulness is the new face of American Buddhism and that the science and practice of mindfulness is influencing the future direction of Buddhism.

It’s a fascinating history about how mindfulness came to be so prominent in this country. After initial exposure from Buddhist monks, the three main influences that started the mindfulness movement were 1) the establishment of insight meditation practice centers such as IMS that were founded by Americans who studied with Asian monks, 2) the popularity and success of Thich Nhat Hanh writings and teachings, and 3) the establishment of mindfulness-based stress reduction (MBSR) by Jon Kabat-Zinn. ‘

Over time is that mindfulness has been emphasized as a form of practice that was not the present in traditional Asian contexts and then it was explanted from its Buddhist context, principally in the MBSR work.

Now, there are many people who read and even practice mindfulness who do not know about its Buddhist origins. This makes it more accessible on the one hand, and raises a lot of questions on the other–questions that are explored in Mindful America. This book is mostly descriptive but now without its critique of all the possible applications mindfulness enjoys today.

Mindfulness has, indeed, become a buzzword and is now being incorporated into the mainstream. My work was cited as contributing to this mainstreaming of mindfulness and that is certainly what I intended to do when I wrote Wild Chickens.

My understanding for mindfulness has evolved over the six years since that book came out. I appreciate its Buddhist context much more now, especially as it is described in the Abhiddhamma, which were ancient manuals of the Buddhist psychology.

Mindfulness is not just paying attention to the present moment. It is a particular way of paying attention that does not involve grasping and aversion–the constant pushing away and pulling towards of experiences that the mind engages in, and much more. When we meditate, we can see that process in action. Mindfulness in this larger sense is instrumental in deconstructing our sense of self in a way that can not just make life more vivid or satisfying but free us from suffering.

This radical vision is usually absent in treatments of mindfulness but I am trying to revive that connection and you’ll see that in evidence in my forthcoming book, Mindfulness A to Z: 108 Insights for Awakening. Like Wild Chickens, it contains 108 short chapters but instead of being organized by metaphors it is an index of terms and concepts relevant to mindfulness and the teachings of the Buddha, colored with many personal stories of my successes and failures with mindfulness practice. It will be out in September and you can preorder your copy now.