I Want my WiFi Now! 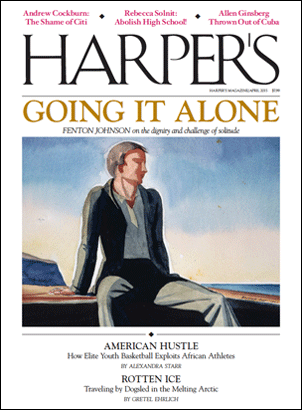 A recent adventure I had illustrates the limitations of the technology in certain places and how easily our expectations can give rise to a world of frustration.

On Thursday March 12, I listened with great interest to Fresh Air that featured writer Fenton Johnson and his article in the April issue of Harper’s Magazine, “Going it Alone” about the virtues of solitude.

As I was about to travel, I thought it would be great to get hold of that article to read en route. I stopped by my local independent bookstore but they only had the March issue on the newsstand. When I looked it up on line, I was told that I could purchase the entire issue for $6.99 for my iPad or iPhone. Great I thought, I’ll bring my iPad.

What ensured was a series of events worthy of a comedic opera. Issues with WiFi signal strengths and Apple IDs conspired to make the article elusive.

On the train to Hartford to teach at the Copper Beech Institute, the WiFi signal is not robust enough to do much of anything. I figured I would try again on the print version at the Hartford airport. No luck. Still stocked with the March issue. So I persisted with my attempt to secure it electronically at the PHI airport waiting for my connection. I was able to get through to the purchase page but for some reason it was brining up my old Apple ID and my cc info was expired. OK, I’ll input new cc information. Won’t work. I get an error message. OK. Try again. Still no luck. OK. I’ll switch my Apple ID to the current one. Success. It appears that I have purchased it and am no ready to download.

I push download and not much happens. A slow trickle on the status bar. I have to check into my flight in less than 20 minutes. It’s crawling. This is despite the fact that I am in American Airlines “Admiral’s Club.” No luck. The article remains elusive. I get to my vacation destination and there is only the barest trickle of an internet connection. It takes several minutes just to send an email or text. Still elusive. The next day, I hear a rumor that the lobby of the resort has better WiFi, so there I go and finally, after days of trying, I download the article. “It’d better be good,” I mutter to myself. And, indeed, the article is excellent. A poetic, grand homage to the lost art of solitude. My mind percolates.

At the same time, I am reading The Call of Solitude: Alonetime in a World of Attachment by Elaine Schaler Bucholz and, along with the sun, I soak in the moments of alone time that I have. I am realizing how solitude is not just important for introverts–it is critical for everyone. That lack of solitude in our culture is a huge problem and one that I’ll be addressing, so stay tuned for more.

The poor quality of Internet access I encountered on this trip was surprising, especially at the airport. Every misstep in my attempt to secure this article was an opportunity to become frustrated and, I admit, some frustration did arise. This emotion reveals hidden assumptions: “I am entitled to seamless, reliable, and robust connectivity at all times.” Apparently, technology is ready to deliver on this promise and no one other than my own mind promised me that.

By recognizing the implicit rule that was being violated, I could step back from the frustration into equanimity. Patience. Breathe. Try again later. The feelings of frustration also revealed garden variety attachment: I was grasping after something that I wanted and, by doing so, making myself vulnerable to suffering. It was as if my sense of okayness somehow depended on having that article–right now! Of course, this is nonsense. By recognizing this, I was able to release into equanimity again.