A Chilling View Inside the Quiet Room: Electric Shocks Preferred to Sitting Still 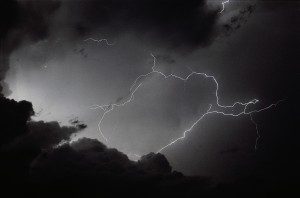 A study recently published in Science provides a window into the restless soul of Americans and a compelling case of why we need mindfulness.

University of Virginia psychologist Timothy Wilson and colleagues conducted a series of experiments where subjects spent time alone in an unadorned room. We are not talking about a lot of time here: 6-15 minutes. Participants preferred to listen to music or interact with their smart phones rather than sit alone with their thoughts. Some even preferred to self-administer noxious electric shocks rather than just sit with themselves in silence.

In one part of the study, they were stripped of their smart phones, books, and writing implements. They were instructed to “entertain” themselves thinking but were not encouraged to meditate. They just had to stay in their seat and not fall asleep. Sounds easy, right?

The study confirms what anyone who has ever attempted to meditate knows–the mind wanders. 89% of the participants had mind wandering even though nothing was competing for their attention. More than half the participants reported that it was hard to concentrate and about half did not find the experience enjoyable.

One test of the study had the students try the experiment at home but nearly a third cheated by engaging with external stimulation. These home particiaptns enjoyed the experience even less, so the lab was not to blame for the lack of enjoyment.

Another experiment compared sitting quietly with engaging with listening to music, reading, or doing non-social activities on a phone. The externally focused people enjoyed it more, found it easier to concentrate, and their minds wandered less.

These findings were not limited to college students and were replicated in a community sample ranging up to age 77.

These findings seem to prove the point of  seventeenth century philosopher Pascal who said,“All men’s miseries derive from not being able to sit in a quiet room alone.”

It seems apparent that sitting alone with one’s thoughts is unpleasant because people do not know what to do with their minds. They don’t know how to operate the equipment.

Twelve of 18 men in the study gave themselves at least one electric shock during the study’s 15-minute “thinking” period. By comparison, six of 24 females shocked themselves. All of these participants had received a sample of the shock and reported that they would pay to avoid being shocked again.

“What is striking,” the investigators write, “is that simply being alone with their own thoughts for 15 minutes was apparently so aversive that it drove many participants to self-administer an electric shock that they had earlier said they would pay to avoid.”

Wilson and his team note that men tend to seek “sensations” more than women, which may explain why 67 percent of men self-administered shocks to the 25 percent of women who did.

We don’t know how to operate our most sophisticated piece of equipment. 86 billion neurons that cannot direct themselves to the simple fact of being alive for fifteen minutes or less.

Research has shown that minds are difficult to control, however, and it may be particularly hard to steer our thoughts in pleasant directions and keep them there. This may be why many people seek to gain better control of their thoughts with meditation and other techniques, with clear benefits. Without such training, people prefer doing to thinking, even if what they are doing is so unpleasant that they would normally pay to avoid it. The untutored mind does not like to be alone with itself.

Tutor your mind by practicing meditation!

Drive by Shooting: Mindfulness on NPR
archives most recent
More from Beliefnet and our partners
previous posts