Violence is Everywhere … Or is It? 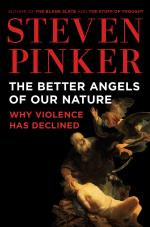 I had the privilege of seeing Steven Pinker talk at the University of Vermont the other day. Pinker is the author of How The Mind Works, The Blank Slate, The Language Instinct, The Stuff of Thought, and most recently, The Better Angels of Our Nature. He spoke about the history of violence. Here is the advance description of his talk:

Faced with the ceaseless stream of news about war, crime, and terrorism, one could easily think we live in the most violent age ever seen. Yet as New York Times bestselling author Steven Pinker shows in this startling and engaging new talk, just the opposite is true: violence has been diminishing for millennia and we may be living in the most peaceful time in our species’ existence. For most of history, war, slavery, infanticide, child abuse, assassinations, pogroms, gruesome punishments, deadly quarrels, and genocide were ordinary features of life. But today, Pinker shows audiences how all these forms of violence have dwindled and are widely condemned. How has this happened?

This was a fascinating and illuminating talk. With unequivocal data, Pinker shows that all forms of violence are in decline over the centuries. Why does it seem, then, that violence is everywhere? One reason is media. The media reports on violent events disproportionately. If all the violence in the new was counterbalanced by all the good things happening around the world, things would seem less dire. Another reason is again media. The immediacy and availability of media brings these events to our eyeballs in powerful fashion and by doing so distorts our sense of their frequency.

Another reason is our psychology. Recent events tend to make big impressions upon us while remote events fade into oblivion. We don’t have the context to appreciate how brutal it was to live in the middle ages and certainly there is no shortage of horrific events occurring around the world right now.

Pinker referred to the seeming certainty that the world would not survive the cold war. I can certainly remember thinking in college that we would never live to the year 2000; that nuclear Armageddon was not a question of whether but when. But here we still are.

What accounts for the lessening of violence over the centuries? One big reason is the civilizing process. We have become more law abiding, have recognized the rights of oppressed groups, and so forth. Another reason is connectivity. The cost of violence in an interconnected world are higher. It behooves everyone to be more civil.

Of course, things could change in an instant, but for now we have a relative peace. I would be interested to see how the decline in violence correlates with the rise of Buddhism in the west. And while the trend Pinker presents is encouraging, we still have a lot more work to do.

The Buddha’s teaching embrace both civilizing (do what is good for yourself and others) and connecting. They recognize, we are interconnected and that violence to other is violence to self.

Pinker’s message gives us something to be hopeful about.

Fall Foliage: Invitation to Awakening
archives most recent
More from Beliefnet and our partners
previous posts