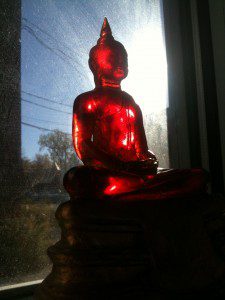 In Japan, the Buddha’s birthday is being celebrated today. Actually, it is the birthday of Siddhartha Gautama (or Siddhata Gotama in Pali), the man that later became the Buddha — the awakened one.

This is a day of gratitude and in Japan, according to Wikipedia, “Japanese people pour ama-cha (a beverage prepared from a variety of hydrangea) on small Buddha statues decorated with flowers, as if bathing a newborn baby.”

So, contemplating the Buddha’s birthday, of which he had 80, what can we consider?

Well, let’s first consider birthdays. Like most holidays, birthdays privilege one day over another and, thereby, run the risk of subverting mindfulness (because all days can be regarded as special). At least once a year we remember we are alive, and awaken to the precious possibility that this life represents. Maybe.

In this sense, every day is our birthday. In fact, every moment is a birthday — a birth into this moment.

Next, let’s consider the Buddha. Who was he? He was not the founder of a religion. Rather, he was a teacher, a guide, or as he liked to see himself, a physician treating the maladies of the human condition. He taught methods to alleviate this suffering, this anguish, the pervasive dissatisfaction that characterizes the human condition.

He did not ask his followers (or his patients) to take these teachings on faith. Rather, he asked them to test these principles for themselves. 2500 years later, we can do the same each time we sit down to meditate.

And the same principles still apply. The Digital Age contains different versions of anxiety than the Axial Age, yet something common connects over millennia. Something is off. If we engage life without mindfulness things are not quite right. The Buddha made this insight accessible, palpable, and most importantly doable.

For this reason, we can celebrate the birthday of this being who gave humanity a dharma — a set of livable truths — that when embraced lead to an enduring and abiding engagement with life and our best look at being happy.

read next post
TED Tuesday: Bill Strickland in His Own Words
archives most recent
More from Beliefnet and our partners
previous posts