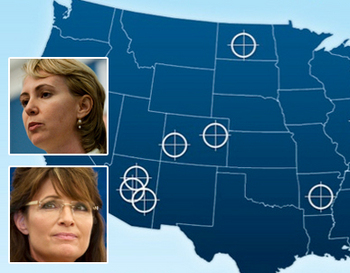 Congresswoman Gabrielle Giffords, Democrat from Arizona, was shot in the head a point blank range this past Saturday injuring 14 other people, with six dead. The suspect is 22-year-old Jared Loughner who apparently planned out this killing ahead of time.

If you listened to Tom Ashbrook’s On Point this morning, the conversation turned towards the rhetoric of violence and First Amendment rights for free speech.
An article in the Daily Beast catalogues violent rhetoric that has been used towards Representative Giffords. Sarah Palin placed Giffords in her “crosshairs.” An article in the Huffington Post reports on Palin’s denial that the “crosshairs” had anything to do with guns.
Her opponent in the congressional race whom she narrowly defeated, Jerry Kelly, according to this article, said, “ “Get on target for victory,” “Help remove Gabrielle Giffords from office. Shoot a fully a automatic M16 with Jesse Kelly.”
Obviously, it is impossible to attribute cause and effect. This disturbed young man could have been acting alone out of his personal situations and circumstances. He could also have been influenced by political rhetoric provided by Sarah Palin, Rush Limbaugh, Glen Beck, and others. For example, Sarah Palin says, “Don’t retreat, reload.”
George Eliot in Middlemarch cautioned perhaps prophetically, “All of us, grave or light,
get our thoughts entangled in metaphors, and act fatally on the strength of
them.”
We can see metaphors of violence and warfare in contemporary political speech. Most of us, thankfully, don’t act out these metaphors.
Whatever the case, we can see that political speech focuses more on attacking the person, e.g., Obama, rather than ideas, e.g., healthcare.
Whatever is happening, mindfulness is certainly absent. So we can think about the words we use and consider the consequences of the words we use. We identify with our words; they shape the way we see the world, what we pay attention to and what we ignore.

Stress Reduction Sunday :: After the Novelty: Finding Peace in the Present Moment
archives most recent
More from Beliefnet and our partners
previous posts