Jean-Paul Sartre, The Buddha, a Mountain and a Snowboard 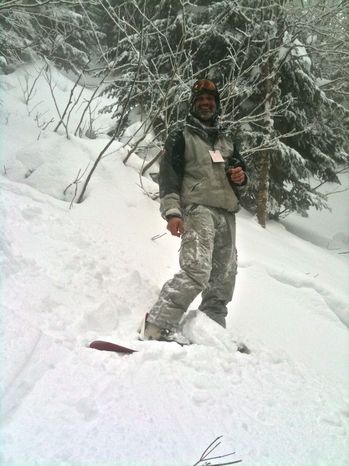 Vermont has mountains and snow, lots of snow. Despite their diminutive stature relative to the Rockies or the Alps, we still have a lot of vertical feet. This day I was dropping down the 2680 vertical feet at Smugglers Notch.
Sartre, along with others such as Kierkegaard, Jaspers, Heidegger, Binswanger, Camus, articulated a philosophical view of life focused on the very fact of our existence — hence “existentialism”
The four foundational ideas in existential philosophy are finitude, autonomy, responsibility, and authenticity.
Finitude recognizes that we are finite, that we are going to die and that typically we’re not too happy about this prospect. We might find ourselves in denial of our own own eventual death and thereby limit our capacity to live fully in this moment. The saying goes, “we refuse the loan of life for fear of paying the debt of death.”
Snowboarding (or skiing) brings us to the edge of this finitude. Traveling at high velocity down the steep face of a mountain at high speed is dangerous. Traveling so through the woods is, perhaps, even more dangerous.  Unlike playing a video game, falling or hitting a tree has real world consequences. The thrill of riding excites every cell in the body and let’s you know that you are, indeed, alive. It’s also cold and we have an elemental connection with nature. Sometimes when the snow is not flying and the sun makes a cameo appearance, the views are breathtaking.
Autonomy recognizes and invites us to be free — free from the arbitrary influences of others and culture, free to be our own individual selves and to pursue our unique values, desires, and visions. It takes work to be autonomous, to break ourselves free from what Nietzsche called the “herd” mentality. It’s just as hard for us today to figure out who we are and what we want when we are inundated with commercial messages and cultural images (the average American watches over 30 hours of television per week!; imagine if all, or even some, of that time was spent meditating!).
Snowboarding is freedom. We have autonomy to make our way down the mountain as we choose amongst the various options of the trails or making our way through the woods. Of course, there are limits to this freedom. The laws of physics provide some constraints. We can’t ride uphill and we can go between trees that will not permit passage.
Responsibility according to the existentialists is, as the term implies, taking responsibility for our words and actions. We don’t seek to lay blame on others or circumstances. We recognize that we are the creators of meaning and that if we want to live an authentic life, it’s up to us to do so.
Snowboarding embraces responsibility. We are the authors of our actions. We are the agents of movement. No one else can make the turns for us.
Authenticity is about living in accord with what is true for us. It’s being responsive to our own values and knowing what these are beyond what other people and the culture tell us they should be. Authenticity is the courage to say what needs to be said, to be silent when silence is wisdom.
Snowboarding encourages authenticity. It is very real and comes forth out of our agency. Each turn stems forth from an action that is directed by our intentionality. It’s also joyful in the unique way that gravity sports can be. We are on that edge of reality, with injury and death stalking close by.
I tell a story in Wild Chickens about a day on Jay Peak in 2000. I was riding through some steep woods, mindful, engaged, and skillfully joyful. My mind was fully with the experience of the deep snow and the dancing turns around the trees. When the hill flattened out and the gravity challenge diminished, my mind started to wander into an imaginary conversation. I lost my mindfulness and control, insinuating my board between some saplings and injuring my knee in the process. At that moment I had lost my authenticity and vested my responsibility from my direct action to the whims of fantasy.
There is, perhaps, no greater feeling of freedom, joy, and fun than being on a snowboard on a deep powder day in the cozy and fierce mountains of my Vermont home. We get used to cutting through ice and hard-pack snow we call boilerplate. It’s an exceptional bliss to have this opportunity of deep receptive snow.
We can all find that exceptional activity that brings us into natural mindfulness and its attending blissfulness. Of course, with practice any and every ordinary moment can connect us to this bliss as well.
If Jean-Paul Sartre had had a snowboard, he might have been a Buddha. For brief moments the other day, I was Buddha too, when I wasn’t being an excited kid whooping it up!
read next post
Metaphors for Mindfulness on the Mindfulness and Psychotherapy Blog
archives most recent
More from Beliefnet and our partners
previous posts