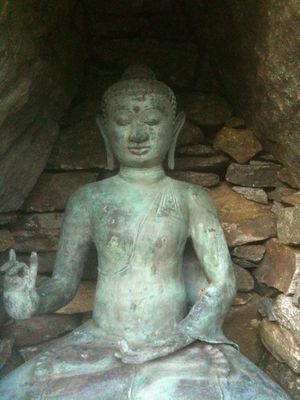 Buddhism is a relatively new term, coined in the 19th century by Western “Orientalists” studying the cultures and traditions. Mu Soeng points out that, “Buddhism is not a unitary phenomenon.” It might be more accurate to say there are many Buddhist traditions that trace their origin back to the Buddha — Siddhartha Gotama — some 2500 years ago.

The Buddha was not a Buddhist; he was not founding a religion and did not see himself as the leader of a religious movement. What was he doing then? Teaching the dharma to any and all interested parties (including members of any caste and later women). He viewed himself more as a physician offering medicine to cure the sickness that besets us.

In common parlance these two phenomena get mixed up — Buddha and Buddhism. I teach and practice Buddha rather than Buddhism. Buddha, recall, is a metaphor. When Siddhartha did what he did under the Bodhi tree that fateful night when he was 35 years old he became “Buddho” — awake. He had awoken from the delusion of existence and the constant gravity pull of craving to see things as they were.

To refer to this as enlightenment is to use yet another metaphor and one that carries a different meaning. So he woke up that long night and after an agonizing struggle decided to help others to wake up too. He did so at first by teaching the Four Noble Truths. That’s Buddha and it is also an integral component of any Buddhist tradition.

Buddhism carries many connotations, appealing to some and off-putting to others. Buddha and the Four Noble Truths are, perhaps, universal, applying to everyone regardless of religious persuasion. It’s just that it’s hard to separate the term Buddha from the Asian images of a seated, half-smiling, androgynous figure.

Certainly we are all situated in a personal context that is situated in a cultural context that is situated in an historical context. The cross-legged Asian Buddha comes with its own contexts. And while we are all shaped by these various contexts we all are born with the same neurological hardware and all succumb to one degree or another to the pull of desire. The case for universality of desire is strong, and this is why we all have the opportunity to awaken to a life that enjoys more freedom from the dictates of desire.

Meditation also seems exotic. Yet what is exotic about closing your eyes (or keeping them open) and paying attention to your breathing? What could be more prosaic? There is nothing mystical about this practice and nothing to bar access to any interested party.

Indeed, we have all had our moments of Buddha whether we were aware of them or not. To practice mindfulness meditation is to make these moments more frequent and more accessible. We can go there at any moment, especially during the difficult moments of our lives.

So, we are all Buddha. We all have the potential to awaken
(or we are already awakened and just cut off from that realization). Good morning!

read next post
From the Archive :: Best of 2010 :: Stuart Brown Says Play is More Than Fun
archives most recent
More from Beliefnet and our partners
previous posts