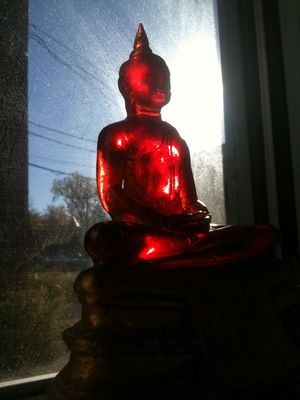 Today is 8 December and Bodhi is being observed around the world. It marks the day of Siddhartha Guatama’s enlightenment sitting under the pipal tree in what is now Bodhgaya India. This event occurred somewhere between 527 BCE and 444 BCE.

In the Zen traditions, today marks the end of the Rohatsu Sesshin (retreat) that begins on 1 December. What better way to commemorate the Buddha’s attainment than reproducing it yourself!

What happened under that tree was the culmination of approximately seven years of concentrated effort and the resolution of thirty six years of unhappiness. When Siddhartha rose from his spot under the tree he became the Buddha — the enlightened one or the awakened one.
Of course, these are two different images — enlightenment and awakening, and as Stephen Batchelor points out carry very different metaphorical connotations. Enlightenment suggests turning the lights on — illuminating what was previously dark. You might imagine the heavens opening and a arc of sunlight emerging from the clouds accompanied by trumpets and harps heralding the emergence of a profound and irrevocable way of being. Awakening is more ordinary, we do it everyday. And as we do in our life, we go into and out of sleep. If we pursue the path the Buddha laid out, we, too, will go into and out of sleep. At times we will awaken, if only for a moment. Here is how Batchelor describes it:

Now you see, I think all of this is implied, in a way, in the idea of awakening itself. Awakening, waking up, is waking up to multiplicity, complexity, the world. And the Buddha’s teaching, I think, constantly tends in this direction. It tends away from some unitary experience, an experience of singularity, some privileged spiritual or religious truth or object, such as emptiness, Buddha-nature, you name it. And instead moves into complexity, moves into relationships, it moves into sets of ideas that are somehow connected.

In the traditional story of the Buddha, after defeating the armies of Mara under the pipal tree (Mara is the metaphor for all attachments and desires, including attachment to the idea of self), Siddhartha was radiant. He walked around redolent of transformation. When people saw him they asked, “Are you a man?” “No” he replied. “Are you a god.” “No” he replied. “What are you then?” “I am buddho” (awake).

So we salute this magnificent accomplishment and the revolutionary insights and practices that were born this day so many centuries ago. We need them as much today in the Digital Age as Siddhartha and his compatriots needed them in the Axial Age. The awakened one found a way to cut through the anguish of being alive; to see through the ceaseless vicissitudes of experience.
By understanding that we construct our suffering through our relationship to experience he outlined a method that permits us to deconstruct this suffering. We do so by opening to the uniqueness of each moment and guard against imposing memory and fantasy onto this moment. When we can be here now without expectations and agendas we can experience the same liberation that Siddhartha experienced this day.
Today could just as well be observed as Independence Day — independence from the conditions that give rise to unhappiness. It could also be seen as a birthday — the birth of his new life of freedom and happiness. So, Happy Birthday! Happy Independence Day! Happy Bodhi Day. And, thank you!
read next post

Metaphor Monday :: The Buzzing Fly
archives most recent
More from Beliefnet and our partners
previous posts