Metaphor Monday :: Topple a Nant’an with a Cow

Back to the Starfish and the Spider. The starfish represents the decentralized organization and provides a fitting metaphor for the Buddha’s notion of self. There is no “person” at the top, no executive, no CEO in control of self. The self is an interplexing network of connections.

Neuroscience confirms the Buddha’s idea. We can’t go inside the brain and find the self. Whatever self is, it arises out of the interplay of these sensory and brain processes.
The spider is the ego self, the notion of self that leads to anguish because it has a prodigious appetite for material objects, adoration, admiration, and confirmation. The spider self is always seeking things, approval, and validation. It’s constantly preoccupied with the question of OK-ness (see entry on ) and needs energy and resources for protection and glorification. 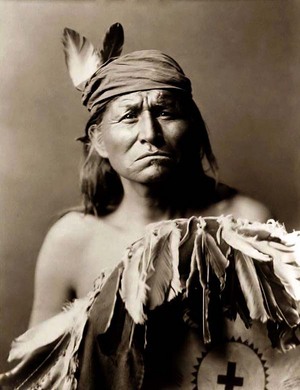 Brafman and Beckstrom present the fascinating case of the Apache. They were able to fight off the Spanish, Mexicans, and Americans for centuries because they were decentralized. There was no one place for their adversaries to attack, no one person to take down. In other words, no spider to kill.
The Apaches were lead by Nant’ans, spiritual leaders like Geronimo who led by example not edict. If an Nant’an was killed, another stepped forward to take his place. The Apache remained resilient, mobile, and impervious to destruction.
This persisted until 1914. The Americans gave the Nant’ans cattle shifting their power from symbolic to material. “The cows changed everything. Once the Nant’ans gained authoritative power, they began fighting with each other for seats on the newly created tribal councils.” Greed undermined their real power to lead.
This is a potent metaphor for self. If we see the cows as attachments wherever we are attached we are vulnerable; we have something to protect. Our identity shifts from values to things. Attachment to things (even beliefs about ourselves) gives us something to protect and resources must be mobilized to take care of them. We lose fluidity, mobility, and resilience.
Suzuki Roshi said if “your mind have a lot of sheep and cows, give them a large meadow.” Don’t try to control them; don’t try to possess them. Just let them be. Likewise, when it comes to the ideology of ourselves, are we better off with a decentralized model where we lead by example rather than material power.
This decentralized, non-attached way of being helps us to persist without unnecessary anguish, suffering, and dissatisfaction.
If someone offers you a cow: beware! These cows may come in the form of a promotion, a bigger house, a more expensive car. These things can weigh the self down and centralize it into a vulnerable form.
(photograph courtesy of http://www.old-picture.com/indians/Apache-Warrior.htm)

Stress Reduction Sunday: Mindfulness :: Becoming and Dissolving as an Antidote to Stress
archives most recent
More from Beliefnet and our partners
previous posts