I recently rented and watched “Hachi: A Dog’s Tale” starring Richard Gere and an array of Akita’s. The movie is based on the true story of an Akita who waited for his deceased master at the train station everyday for ten years until his own death. The original story took place in 1920s Tokyo and has been updated to the current day in some idyllic suburban town in the Tristate area or New England. The movie takes a long to time to wind up and we are exposed to a life too perfect. A comfortable and stylish old farmhouse in a friendly town where everyone knows each other, where dogs roam round unencumbered by leashes and the threat of cars. An impossibly functional family: loving husband and wife, well-behaved and beautiful daughter who gets married and pregnant in lock-step with the mainstream schema of the ideal family. Meanwhile this lost puppy becomes part of the family and fiercely attached to its owner, following him to the train station every morning, and showing up again at 5:00 PM anticipating his return. On the day his master suddenly dies, Hachi intuiting this, finally fetches a ball, something he would never do before. 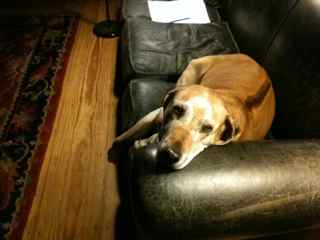 I’d like to say that I transcended the maudlin and maintained a perspective of equanimity as I watched. As my aging Rhodesian Ridgeback lay next to me, his hulking form curled up, I was teary throughout and then let go into a wave of vigorous sobbing as the main action of the movie arrived. Hachi shows up at the train station every morning and waits all day. At night he goes to sleep under an abandoned train. He is fed by the staff of the train station and this is his life — for 10 years. Why was I crying so? A remarkable story about canine loyalty is one reason. What remarkable creatures. The film also reminded me poignantly of my own dog’s aging and impending demise sometime within the next couple of years (likely based on average life expectancies). Any image of an aging dog sends me into paroxysms of grief. There is something special about the grief we experience for a dog and this will be the subject of another blog entry and will be explored in a book at some point.

It’s also interesting to consider his loyal behavior as evidence of hope. His behavior of going to the train station does not extinguish as it should according to operant conditioning principles. A mouse would not continue to show up for a reinforcer that was not there, but Hachi has an attachment system in his brain and sufficient capacity for imagination to override the evidence that his master is not getting off that train. We, too, are creatures of attachment and capable of sustaining this type of evidence-defying and reinforcer deficient hope. We do so at our own peril: We stay in relationships that are unhealthy; we keep repeating the same destructive patterns in our life. All the while, there is hope based on memory that things might be different this time. We show up to the train station each day waiting. I counsel myself and others to Kill Hope in these situations. Unlike Hachi, we have the cerebral capacity to override our limbic/attachment drive to sustain hope (and this is limited to false hope). We need to confront the question: “Do I want to spend the rest of my life at the train station waiting?” That could be a deliberate choice or it may arise out of the unconscious pursuit of this deep but deluded conditioning. It’s a reflection on acceptance: Can we accept what is so?

What is Mindfulness Anyway?
archives most recent
More from Beliefnet and our partners
previous posts