In a shift in right-wing “prayer” policy, the Liberty Counsel is now urging supporters to “adopt” a “liberal” and pray for that person to change his or her political and moral beliefs. The campaign allows people to “adopt” one of 11 named “liberals” or anybody else who might be a “liberal.” See below: 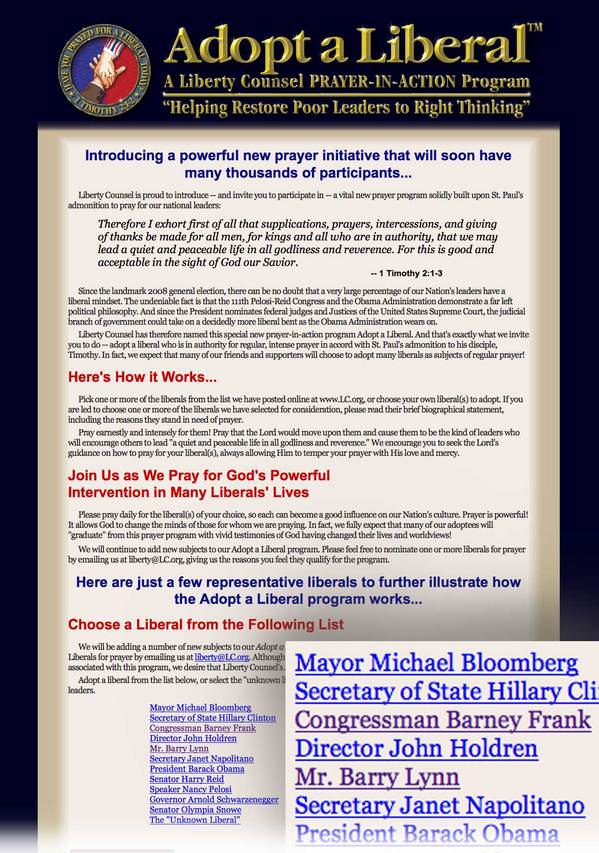 I was delighted to see that I was the only non-government official offered up for adoption.  I am right in line with President Obama, House Speaker Nancy Pelosi, and (I’ll admit this is my favorite) Arnold Schwarzenneger.

As some of you know, I have been the target of several “imprecatory prayer” campaigns recently, where Pastor Wiley Drake and former chaplain Gordon James Klingenschmitt have been praying for my death.  The new approach seems a lot more civil.

I did receive one e-mail indicating that the sender would be happy to
“adopt” me if I would do chores. Sorry about that, but that is a
non-starter.  I am not raking leaves; I am not taking out the garbage.
I have enough of that to do where I live now.  Please also note that I
do stay up late and I will not live with cats.

In another note, Christian Broadcasting Network White House Correspondent David Brody also made a reference
to me today.  He was reporting that the phrase “In God We Trust” has
been chiseled into the new U.S. Capitol Visitor Center over the objection
of civil libertarians. He posted a photograph of what the new engraving
looks like and then he joked that the Congressional Prayer Caucus
originally would have preferred an engraving that looked like this
picture:

Brody followed that up with, “C’mon just a joke! A little Evangelical humor! Yes we actually have a sense of humor. Barry Lynn is probably not laughing.”

Actually, David’s report gave me quite the chortle.

But seriously, is there anybody out there who honestly believes any
of America’s political leaders will be better people because of this
new engraving?  Write me if you do, but forgive me if I chuckle.

Thank you for visiting LynnvSekulow. This blog is no longer being updated. Please enjoy the archives. Here is another blog you may also enjoy: Jay Sekulow: Faith and Justice  Happy Reading!

Thank you for visiting Lynn V. Sekulow. This blog is no longer being updated. Please enjoy the archives. Here is another blog you may also enjoy: Jay Sekulow’s Faith and Justice Happy Reading!!!

Barry,   It’s hard to believe that we’ve been debating these constitutional issues for more than two years now in this space.  I have tremendous respect for you and wish you all the best in your new endeavors.   My friend, I’m sure we will continue to square off in other forums – on news […]

Thanks for the Memories

Well Jay, the time has come for me to say goodbye. Note to people who are really happy about this: I’m not leaving the planet, just this blog. As I noted in a personal email, after much thought, I have decided to end my participation and contribution to Lynn v. Sekulow and will be doing […]