Find the Light in Your Darkest Hour

A pair of brothers set out for a day of extreme climbing on a mountain with steep rock faces and dangerous icefalls. They take nothing with them save for the gear they will need to enjoy an afternoon of climbing. But three hours into their ascent, they’re caught off-guard by a totally unexpected storm of freezing sleet and hail.

Within minutes both men are near-hypothermic, and they realize that without shelter and a fire to warm them, they will not make it back down the mountain. So they dive into the first small cave they can reach.

Their brief search of the darkened space turns up some old pieces of wood, but even so, all of it seems hopelessly damp. By good fortune, they also find the remnants of an old, weathered backpack obviously abandoned there years ago. A quick examination of its contents provides nothing but some old candy bar wrappers, a camping knife, and a small piece of flint. They smile at each other. It’s understood: their one hope lies in starting a fire, even though it seems against all odds.

Minutes later, they are taking turns; first one, then the other, striking the flint against a hard stone they took from the cave wall, hoping a spark will ignite a fire in the wood. But no flame appears—not even a trail of smoke to give them hope.

Before too long, the older of the two brothers despairs and gives up; he retreats into one of the cave’s dark corners and, rolling himself up into a ball, wants only to fall into a sleep from which he is unlikely to awaken. But the younger brother remains steadfast; again and again he strikes the flint until his hands are torn and cut, barely able to hold onto the very tool he needs to save his life. Fifty times, a hundred times, a spark from the flint flies into the small pile of slivered wood and … nothing happens.

Finally, his brother calls out to him from the corner where he lies. “What’s the point, man? That wood’s too wet; it will never ignite. C’mon, give it up, even if you don’t want to. At least let me sleep in peace.”

But the younger brother understands that unless he can create a flame, their lives are as good as over. So he says, “Look, you do what you have to, but I’m going to keep striking this flint to make a fire until either there’s nothing left of it or I no longer have the strength to hold it in my hand.”

Another hundred times he strikes the stones together. A hundred sparks fly straight into their wooden target, only to disappear into the darkness. Finally, he’s so tired that he simply can’t go on any longer. He has nothing left of himself or the flint. He looks down at the pile of slivers, his body gives a last shiver, and he passes out from exhaustion, sliding into the cold darkness that seems to be folding in all around him.

The next thing he knows, his eyes detect what seems to be a faint light flickering through their closed lids. And more—his face can feel something warm gently touching it! This thought passes through his mind: what a sweet delusion—this must be the last thing a climber feels before he slips off into the abyss. But instead of drifting back into the comfort of his dream, he makes himself open his eyes. And what does he see right before him? A small flame! His eyes open wide in disbelief: as impossible as it seems, a fire must have started when he struck his last blow!

Quickly but very carefully, so as not to put out the infant flame, he drops small pieces of wood into it. Gently he blows life into the growing, glowing, life-giving embers. Tense moments later, the dark cave dances with light and spreading warmth.

He gets up, walks over to where his brother sleeps, and awakens him with a soft touch, a smile, and a simple statement: “We’re going to make it.” 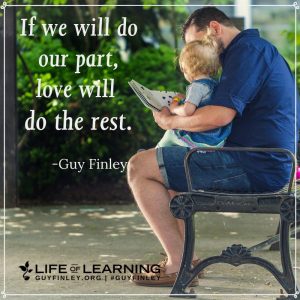